Stall Plates of the VII Chapter of the Order of the Golden Fleece (1445), Part 3


Today we finish our look at the stall plates of the knights of the Order of the Golden Fleece at the Chapter held in St. Bavo's Cathedral in Ghent, Belgium, in 1445. 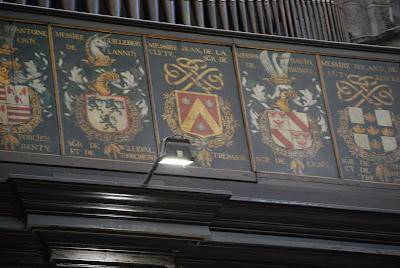 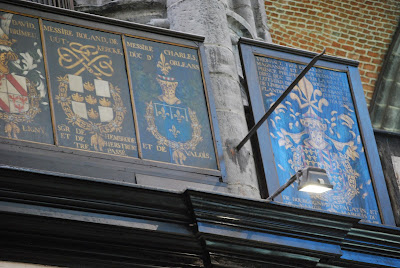 Roland d'Uutkercke, Seigneur of Hemsrode and Herstrunt: Argent on a cross sable five escallops or [also on photograph number 11, above];
Charles, Duke of Orleans and Valois: Azure three fleurs-de-lis or overall a label of three tags argent; and
(partially obscured) Philip the Good, Duke of Burgundy [see photograph number 13, immediately below].
13. 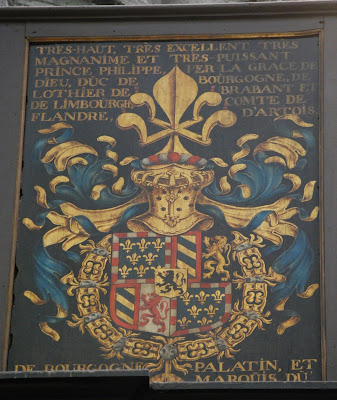 Philip III (the Good), Duke of Burgundy, Lothier, Brabant, and Limbourg, Count of Flanders, Artois, and Palatine Burgundy (and more, hidden by the shelf; he was also the Grand Master of the Order of the Golden Fleece at the time of this Chapter): Quarterly: 1 and 4, Azure semy-de-lys or a bordure compony gules and argent; 2, Per pale, Bendy or and azure a bordure gules, and Sable a lion rampant or; 3, Bendy or and azure a bordure gules, and Argent a lion rampant gules crowned or; overall an inescutcheon Or a lion rampant sable langued gules.
14. 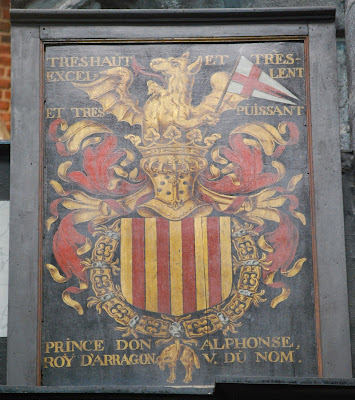