Stall Plates of the VII Chapter of the Order of the Golden Fleece (1445), Part 1


On November 30, 1445, the VII Chapter of the Order of the Golden Fleece was held in St. Bavo’s Cathedral, Ghent. The Grand Master of the Order at that time was Philip III (the Good), Duke of Burgundy.

Still displayed in the Cathedral are the stall plates of the members of the Order. (Another Chapter of the Order of the Golden Fleece was held in the Cathedral in 1559, and those stall plates are displayed in the Cathedral as well. We will look at those after we see those from the 1445 Chapter.)
I will number the photographs in the order that I took them as we toured the Cathedral (which isn't necessarily the order in which they perhaps ought to be viewed). The number will be useful, as there are several instances where a coat of arms appears more than once, where two (or more) brothers, or a father and son(s) may have all been members of the Order at that time. Where this occurs, I refer to the number of the other photograph(s) with the duplicative arms to make it easier for you to cross-review and compare them.
And as there are a lot of pictures, I am breaking them up into three groups, to avoid visual overload.
Today, we look at the first of these groups of stall plates. The names, ranks, and blazons of the arms run from left to right in each photo. (As usual, you may click on any image to go to a larger version where you can see these plates in greater detail.)
As you will note, each stall plate contains the arms of the individual within the collar of the Order of the Golden Fleece, the helm and crest of that individual, and script naming the person and his landholdings.
1. 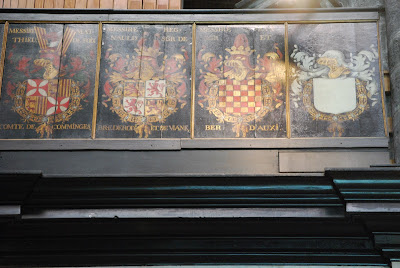 Mathieu de Foix-Comminges, Count of Comminges: Quarterly: 1 and 4, Argent a cross formy throughout; 2 and 3, Per pale, Or in pale two cows statant gules collared and belled argent, and Or three pallets gules;

Jean IV, Seigneur of Auxy: Checky or and gules; and 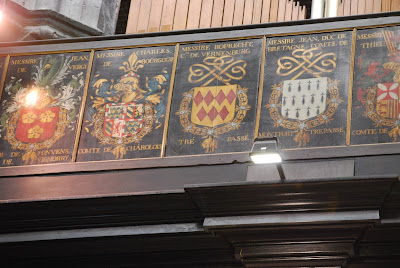 Jehan de Vergy, Seigneur of Fouvans and Vignorry: Gules three cinquefoils or;
Charles of Burgundy, Count of Charolais: Quarterly: 1 and 4, Azure semy-de-lys or a bordure compony gules and argent; 2, Per pale, Bendy or and azure a bordure gules, and Sable a lion rampant or; 3, Bendy or and azure a bordure gules, and Argent a lion rampant gules crowned or; overall a label of three tags argent;
Ruprecht, Count of Virnebourg: Or seven mascles four and three [conjoined?] gules;
Jean VI, Duke de Bretagne [Duke of Brittany] and Count of Montfort Trepassé: Ermine.
3. 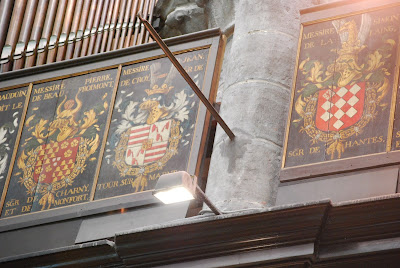 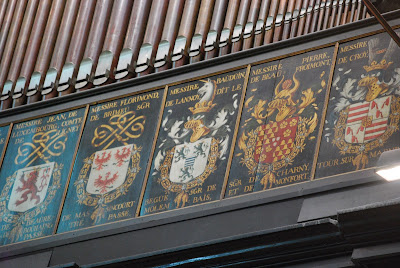 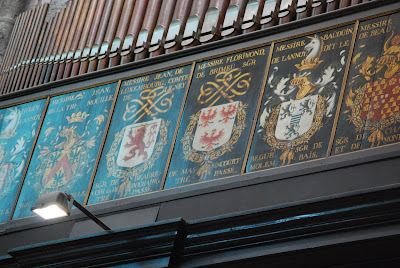