Stall Plates of the XXIII Chapter of the Order of the Golden Fleece, 1559, Part 2


Continuing our review of the stall plates in St. Bavo's Cathedral in Ghent, Belgium, from the Chapter of the Order of the Golden Fleece held there in 1559, we find the following: 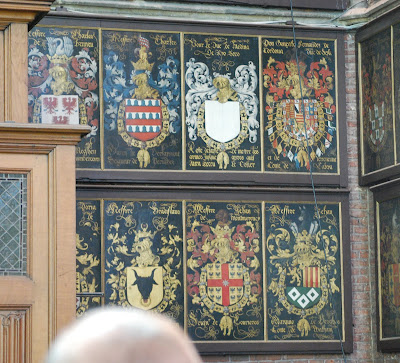 In the top row, from left to right, we have the arms of:

Charles de Brimeu, Comte de Meghem (1524/25-1572): Argent three eagles displayed gules beaked and legged sable. (We have seen these arms among the stall plates from the Chapter held here in 1445.)

Gonzalo II Fernández de Córdoba (1520-1578): A horrendously complex shield. Please feel free to click on the image above to see a larger version with more detail of the many and complex quarters in this coat of arms.

And in the bottom row, still left to right:
(hidden) Antonio Doria, Marquis of San Stefano; Per fess or and argent an eagle displayed sable crowned or between in dexter chief a demi-sun issuant from chief or rayed gules and issuant from each flank a flame gules.

Jean IV, Marquis de Berghes (1528-1567): Per fess: Per pale sable a lion rampant or and Or three pallets gules; and Vert three mascles two and one argent. 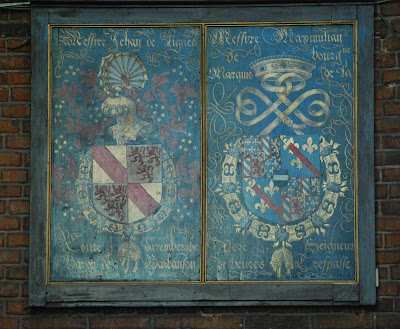 Maximilien de Bourgogne, Marquis de Vere and Lord of Beveren: Very complex quartered arms plus inescutcheon; effectively, it is Burgundy quartered with a variant of Bourbon, with an inescutcheon Sable a fess argent.  Maximilian was a descendant of Antoine, bastard of Burgundy, an illegitimate son of Philip the Good. 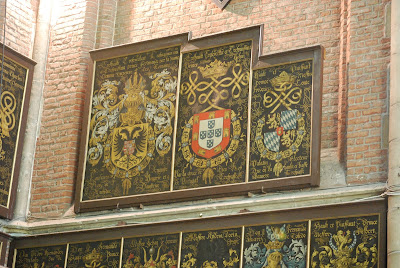 And to finish up our review of these stall plates today, we have the armorial achievements of:
Archduke Ferdinand of Austria, King of Bohemia, Hungary, and Croatia, Archduke of Austria (later Holy Roman Emperor) (1503-1564): Or a double-headed eagle sable, on it's breast an escutcheon: Quarterly: 1 and 4: Quarterly: i and iv, Barry argent and gules; ii and iii, Gules a lion rampant argent; 2, Quarterly: i and iv, Gules a tower or; ii and iii, Argent a lion rampant purpure; 3, Burgundy (too complex to spend much time blazoning).

John III, King of Portugal (1502-1557), Charles V's brother-in-law. Argent five escutcheons in cross azure each charged with five plates in saltire all within a bordure gules semy of towers or.

Frederick II, Elector Palatine: Quarterly: 1 and 4, Sable a lion rampant or; 2 and 3, Lozengy bendwise argent and azure; overall an inescutcheon Gules an orb or.
If you would like to know more of the background and history of any of the individuals whose arms appear in these photographs, I recommend a quick search on Wikipedia, which may tell you more than you really wanted to know.
Posted by David B. Appleton at 2:00 AM