How to Decorate a Balcony


Toward the corner of the building we looked at last time, there was a small balcony overlooking the street. It looks to me like a great place to sit of an afternoon, taking in the sights and sounds of the old city of Ghent, sipping tea (or having a Belgian ale), and watching all the tourists go by. 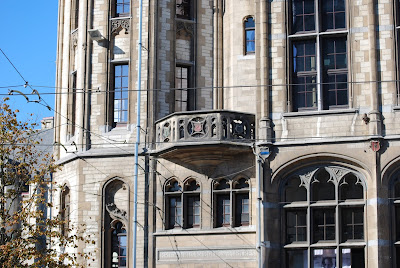 Once again, though, it's the heraldry that we are all about, and this balcony has three coats of arms carved into its balustrade.
From left to right, we find: 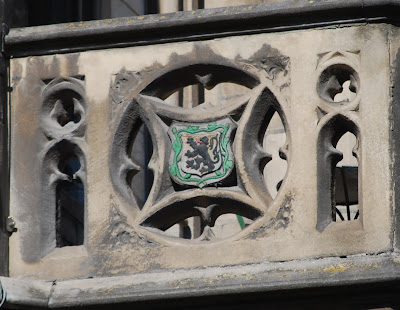 the arms of the city of Eeklo in East Flanders, Argent a wreath of oak vert an inescutcheon Or a lion rampant sable; 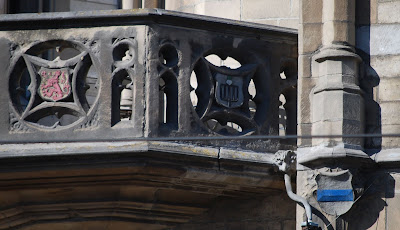 either Laarne or Elsegem, both in East Flanders, and both using the same coat of arms, Or a lion rampant gules; and Lokeren, also in East Flanders, Argent a gridiron sable in chief a turnip argent leaved vert. (I recommend clicking on the image above to see a larger version with better detail. The width of the columns on this blog page only allow me a certain width before it simply starts cutting off the edges of the pictures.)
As a bonus, on far right we see the arms of the city of Tienen, Argent a fess azure.
Now, here's a closer view of the balcony with all three coats of arms:

Next time, we go around the corner of this building, to see what we can see.
Posted by David B. Appleton at 2:00 AM