Continuing in our "heraldic walkabout" of Ghent, Belgium, we came to see this amazing building (in the center) and sculptures on its façade. 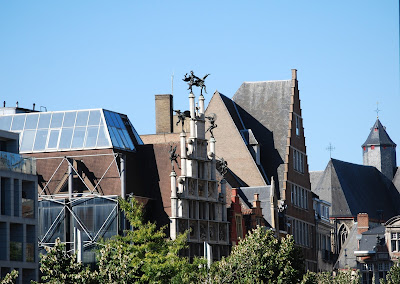 Well, that's a little hard to make out what is going on there. Then we came a little closer, and it rapidly became a bit more Breugel-esque. 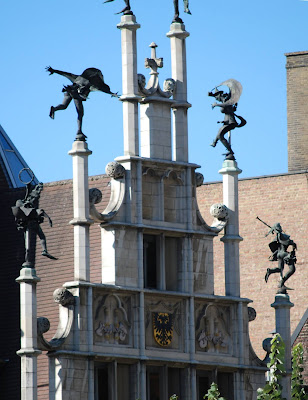 This building is the Mason’s Guild Hall (or at least a replica thereof). The Masons’ Guild built this flamboyant little place to show off their builder abilities and entice wealthy merchant clients. It features some exceptional carvings and is called Den Enghel or "the Angel". (Apparently, the same building is found on the Graslei, number 8. People thought the original was simply lost for a long time, so Ghent builders placed this replica alongside the scenic canal.)

You might note a bit of color in the center of one of the lower levels in the picture above. Here's a close-up: 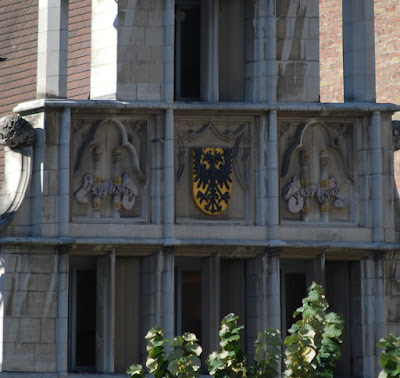 These are the arms, of course, of the Holy Roman Empire (Or a double-headed eagle displayed sable), with the supporters taken from the arms of Spain on each side (a visual representation of the Pillars (of Hercules). You can click on the image above to see a larger and more detailed version of this photograph.)
Surmounting each pair of pillars near their bases is a scroll bearing the words “Plus oultre” (more often seen as “plus ultra”), literally meaning "More more". (“There’s not enough 'more' here; I need more 'more', said Charles”.) Ah, no, I see. It is generally more loosely, and probably more accurately, translated into English as “Further beyond”. It is taken from the personal motto of Charles V, Holy Roman Emperor and King of Spain, and is a reversal of the original phrase Non plus ultra, "Nothing further beyond"; in a sense, a warning: Don't sail beyond this point. (I swear, I learn so much in researching these pictures that I take on these trips.)
Anyway, I guess if you're trying to get people's attention, and their money, there's hardly a better way to do it than to erect an eye-catching building and then throw in the arms and supporters of the man in charge of it all for good measure.
Posted by David B. Appleton at 2:00 AM