One of the advantages of being the Big Cheese, The Man, the CEO, the Boss, etc., etc., is that people will try to flatter you. Sometimes this will take the form of people bowing to your every whim. And other times, it means that they will put your coat of arms on fancy buildings, as we saw in our post of December 7 (http://blog.appletonstudios.com/2020/12/making-heraldic-impression.html).
And then, sometimes they will put your coat of arms on a very fancy building, like on this one beside the main canal in the heart of the old city of Ghent, Belgium.

I know, there's a lot to look at on that façade. Look further up. 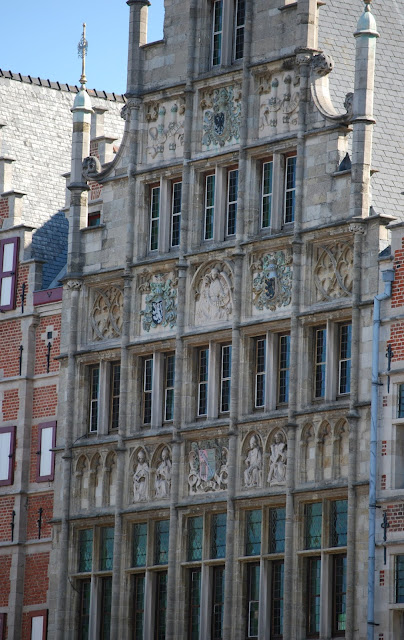 No, not the bottom row with the four figures of bishops and saints surrounding the arms of the guild whose house this is.
No, not the middle row, with the arms of Ghent and Flanders flanking the central figure. 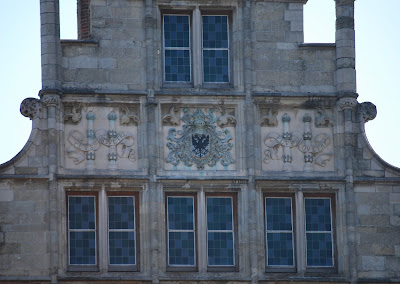 Yes, the one on the top row. The arms of the Holy Roman Emperor, specifically Charles V, Or a double-headed eagle displayed sable, surrounded by the collar of the Order of the Golden Fleece, and flanked on each side by pairs of the Pillars of Hercules entwined with a scroll bearing the motto PLVS OVLTRE (as we discussed in that earlier post on December 7, meaning roughly "Further beyond"). As before, please feel free to click on the image above to see a larger version, which will give you a better idea of the scope of the detail in this heraldic carving.
Yes, indeed, it is good to be the Emperor, and have people create this kind of lasting statement for you. If only we could all be so lucky!
Posted by David B. Appleton at 2:00 AM