Well, This Is Frustrating


This next window is a bit frustrating, in part because there is no inscription giving the name(s) of the donor(s), and in part because, as one site noted, "[t]he way their respective blazons were filled in ... is the result of misinterpretations." 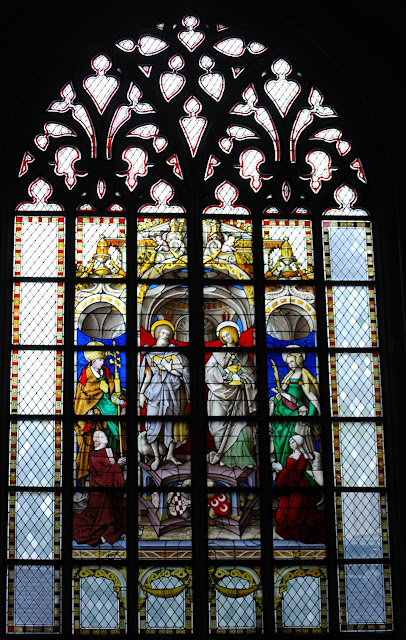 You might think that the presence of the coats of arms of the donors would make them easy to identify. But this is where the second part of the first paragraph above comes into play: "[t]he way their respective blazons were filled in ... is the result of misinterpretations." In other words, what you see may not be what was originally there, but the arms have been modified in unknown ways from what may have originally placed there. (This is a not uncommon phenomenon, where a painter or glazier comes in decades or even centuries later and misunderstands the often faded tinctures of the original, and miscolors the shield and/or charges on it.) 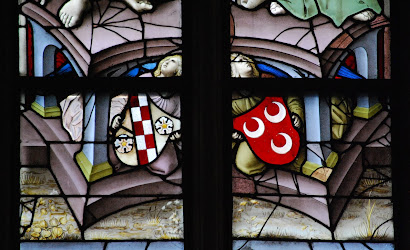 I found nothing in Rietstap's Armorial Général for the husband’s arms. The closest I could find in the Wapenboek van de Belgische Adel (a wonderful, and very colorful, and very thick - 887 pages! - ordinary of Belgian arms, which I refer to often when researching heraldry in the Low Countries) is that of de Wilmars: Gules a bend counter-compony argent and azure between two roses argent. So, a different color for the field, and a different color for half of the squares on the bend.
Rietstap gives 37 examples of Gules three crescents argent, several of whom might be Flemish. The Wapenboek van de Belgische Adel does not have this coat, but does have several instances of de Bailli: Azure three crescents or. Here, we have a different color of the field, and a different color of the crescents on it.

So, I don't know whose coats of arms these are, and neither, apparently, do any of the on-line sources I have used to help me better understand all of these stained glass windows in the Cathedral. If the donors wanted to remain anonymous, despite having placed their heraldry into the window, they have succeeded.