Heraldry: A Doorway into History

The next armorial stained glass window we're going to look at in the Cathedral of Our Lady in Antwerp is a lavish commemoration of a significant event in the city's history which was also a part of historical events on an even grander scale.
In this window, the central panel commemorates Alexander Farnese presenting the keys of the city to Our Lady.  On 27 August 1585, after he had reconquered Antwerp, Governor General Alexander Farnese, duke of Parma, went to the cathedral to assist at the sung Te Deum, as was the custom then when a new sovereign or governor took office. He also explicitly honored Mary "for the victory that she was to be thanked for," an important symbolic gesture, which showed that from then on Antwerp would adhere to Catholicism again. Pious tradition has wanted to give even more impact to this move by representing it as the presentation of the city keys.
The prelate wearing a miter, who represents the approval of the Church, can only be the abbot of Saint Michael’s Abbey, since the Antwerp bishop’s seat was vacant at that moment. 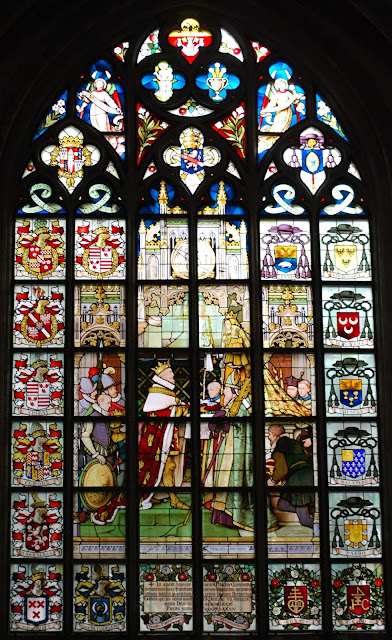 At the top of the window there are four coats of arms: 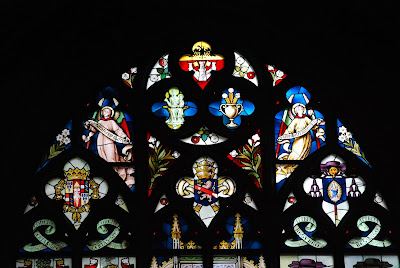 The one at the peak is, of course, the arms of the Margraviate of Antwerp, which we have seen a number of times before.
Directly below the arms of the Margraviate are those of Pope Sixtus VI (1585-1590) (Felice Peretti): Azure a lion rampant argent holding in its dexter forepaw a palm branch or overall on a bend gules mullet of eight points and a trimount couped argent.
To the right of the Pope's arms are those of the Diocese of Antwerp and Chapter of the Cathedral of Our Lady, which we have also seen a number of times already.
And to the left, topped by the coronet of a duke, and a collar of the Order of the Golden Fleece, are the arms of Alexander Farnese (1545-1592), Duke of Parma. Sometimes blazoned as tierced in pale, a more concise way of blazoning these arms might be: Quarterly, 1 and 4, Or six fleurs-de-lis azure (Farnese); 2 and 3, Gules a fess argent (Louvain) impaling Bendy or and azure (Burgundy ancient), on a pale gules the Papal umbraculum surmounted by two keys in saltire wards to chief and outwards argent.
Framing the central panel are sixteen coats of arms: those on the left military (the top three have their arms encircled with the collar of the Order of the Golden Fleece); and those on the right mostly ecclesiastical. (The bottom two have no ecclesiastical insignia, as the others on that side do.) The surname of the bearer of each coat of arms is written on a scroll beneath each shield. (You may click on the images here to see a larger, and more easily readable, version of each.) 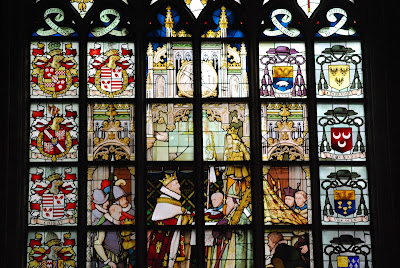 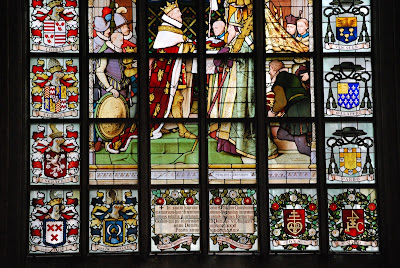 But what of the "historical events on an even grander scale" does this window relate to? As it turns out, we are referring to the international events surrounding the sailing of the Spanish Armada in 1588 and the proposed invasion of England. The plan was that the Duke of Parma's troops would cross the channel in barges, protected by the Armada. The Armada reached the area, but poor communication between Parma and the Armada's commander, Alonso Pérez de Guzmán, 7th Duke of Medina Sidonia, made effective coordination difficult. Parma's troops were also threatened by the presence of Dutch forces in flyboats, who hoped to destroy the barges and drown Parma's army at sea. The English attack on the Armada in the Battle of Gravelines, followed by an unfavorable change in wind-direction, made link-up impossible. And the rest, as they say, is history.
Posted by David B. Appleton at 2:00 AM