I Tried. I Really Did.

Honestly. But, alas, I only have so many hours in a day, and only so long that I can spend trying to identify coats of arms in a single window in a single cathedral in Europe. A place which is filled with many cathedrals, many of which have armorial stained glass windows, most of which have more - and sometimes far more - than one coat of arms in them.
Am I happy about this situation? No, I am not. I much prefer to be able to identify each and every shield in a window. (Because I have an emotional need to, that's why!) But pressing deadlines and other projects needing my attention mean that sometimes I just have to admit that I don't have the time to do that. So for today's entry in the heraldry to be found in the Cathedral of Our Lady in Antwerp, Belgium, I will have to be satisfied with those arms which I have been able to identify. (Some, of course, were easy, like the arms of Antwerp, which we have seen a number of times in recent posts here. Others, not so much.) Anyway, to continue:
The next armorial stained glass window we're going to look at has as its central theme The Last Supper. It was installed in the cathedral shortly after the 1566 Iconoclast Fury. It may be either a reconstruction or a re-interpretation of the original stained-glass window installed in 1503, and contains additions to the early Renaissance architectural background and the arms in the tracery added during a major restoration in 1870. 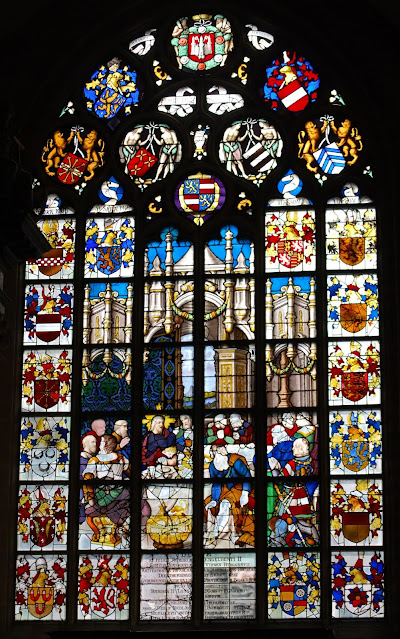 The commissioner of the window was Engelbert II of Nassau (1451-1504), the son of Jan IV of Nassau and his wife Maria of Loon-Heinsberg. He is portrayed, on his knees, wearing a tabard of his arms, in the lower front right, adding himself as a fourteenth figure to those of Christ and the Twelve Apostles.
The central scene is framed by the sixteen quarters of his coat of arms. In the original tracery were his personal blazon and his motto Se sera moy nassau. Now they are surrounded by the coats of arms of the counties and domains that he owned, with viscountcy of Antwerp, at the top. 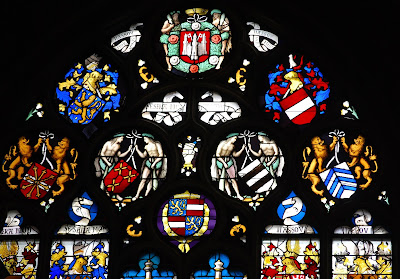 From the top, and then moving down and going from left to right, we have the arms of (where I am uncertain of the attribution of a coat of arms, I have marked it with a question mark [?]):
Antwerp: The version we have seen several times before, with the hands in chief being displayed on banners issuing from the castle, and not placed directly on the field above it.
Nassau: Azure billety a lion rampant or.
Vianden: Gules a fess argent. (Identical to Austria, but not Austria.)

Nassau and Vianden: Quarterly, 1 and 4, Azure billety a lion rampant or (Nassau); 2 and 3, Gules a fess argent (Vianden). 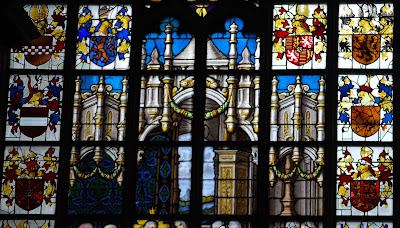 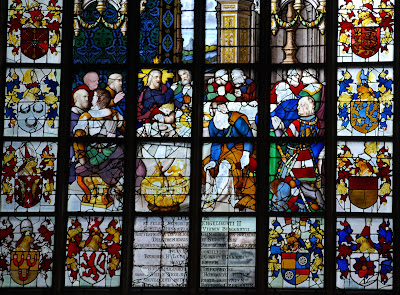 As mentioned above, framing the central scene on the left and right are the arms of Engelbert II's domains. (If you want to see better, more detailed images of any of the parts of this window, click on the image that you want above.) From the top center, they are:
Framing arms (left):
Nassau (again)
Mark: Or a fess checky gules and argent.
Vianden (again)
Cleves?: Gules an inescutcheon argent overall an escarbuncle or.
Lek (Krimpen aan de Lek): Argent three crescents sable.
?: Gules crusilly argent two fish haurient addorsed or.
?: Or three (horseshoes inverted?) gules.
?: Argent a lion rampant gules.