Well, I Certainly Erred on That One!

At least the first time, anyway.
I guess that will teach me to take a cursory glance at a coat of arms and immediately decide I know what it is, without taking a closer look to be certain that I truly am seeing what is there. Here's the background:
A friend of mine posted a picture on Facebook of a portion of a project that he's working on; specifically, black and white drawings of seven coats of arms. One of the coats was this one: 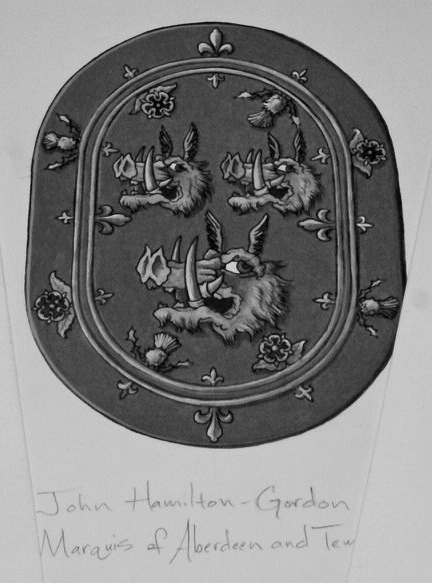 One of the first comments on the post was: "How is that tressure in the middle picture blazoned?"
I glanced at the photo (which was actually smaller on-screen than the image above, and thus slightly less distinct), and quickly wrote a reply: "It's a 'double tressure flory counter-flory', seen in a number of Scots arms, most especially the King of Scotland."
The poster responded, "I thought so but I was thrown off by the alternating flowers."

Imagine my surprise! Roses, and thistles, and fleurs, oh, my!

So I went searching through my Scottish and British armorials for “Hamilton-Gordon” (since the arms were labeled "John Hamilton-Gordon", and came up empty.

Then I had the bright idea to check one of my copies of Burke’s Peerage under the title, “Aberdeen and Tem…”, which turned out to be “Aberdeen and Temair,” where I found it! And, of course, an actual blazon for the tressure.

So I responded, a little more humbly and a lot less condescendingly, "You are correct; I had not looked closely enough to notice the thistles and roses alternating with the fleurs-de-lis. Checking my Burke's Peerage under 'Aberdeen and Temair,' the tressure is blazoned: 'a double tressure flowered counterflowered interchangeably with thistles, roses and fleur-de-lys."

(That said, I would have blazoned it as "thistles, roses and fleurs-de-lys" as being the "proper" plural of fleur-de-lys. But that in no way makes up for my earlier misidentification.)

So there you have it! I messed up, by not really looking at the picture to see what was there.

But as J.P. Brook-Little put it so well in his Introduction to An Heraldic Alphabet:

You can study heraldry until you are azure in the face but inevitably discover, from time to time, that you are really quite vert. I have found this over and over again and I have been a herald for forty years, but never despair, herein lies the fun and if heraldry ceases to be fun -- chuck it.