... just when you think that we were all done with the coat of arms of the County and Duchy of Württemberg we've been looking at in the past several posts (January 27 through February 13, 2020) from Stuttgart, we wander on down the the city of Heidelberg* and - wouldn't you know it? - run across yet another depiction of the arms of the Duchy.

This time the arms are seen as an inlay on a wooden table in the Castle there. 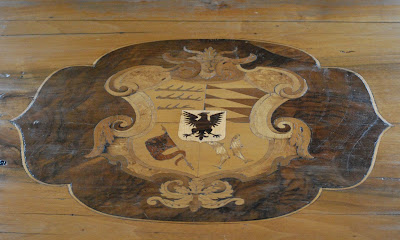 This depiction is a bit different from all of the others we've looked at recently, in that it has an inescutcheon (Argent an eagle displayed sable) over the usual four quarters of Württemberg: Quarterly: 1, Or three stag’s attires fesswise in pale sable (Württemberg); 2, Lozengy bendwise [in some examples, bendwise sinister] or and sable (Teck); 3, Azure a flagstaff bendwise gules steeled argent flying a pennon or charged with an eagle displayed sable (the Banneramt, the office of the Imperial banner); and 4, Gules two fishes haurient embowed addorsed or (Mömpelgard).

I've not yet run across an explanation of the inescutcheon, though I am certain that there must be one.

But it's a beautiful piece of inlay work that was clearly done by a craftsman no mean skill.

* I have a special feeling for Heidelberg; it's the place where my paternal great-grandfather was born back in 1867, and we have records of his paternal line living there since the early  to mid-1700s. So Heidelberg feels a little bit like home to me, despite my minimal knowledge of the German language. His parents each worshiped at the Holy Spirit Church (Heiliggeistkirche) in the old town, one from each side of the wall that was built in the early 1700s inside the Church to separate the Catholic from the Protestant sides. The Catholic father apparently converted to Protestantism, because he and his wife were married, and my great-grandfather was baptized at, the Protestant St. Peter's Church (Peterskirche) a few blocks away near the University. I have no idea how their parents felt about the mixed marriage. Isn't family history fun?