A Memorial to an Officer Lost in the Great War


Continuing our perambulation around the Cloister at Canterbury Cathedral, we found this memorial to an officer of the Royal Navy who lost his life in World War I in 1916. 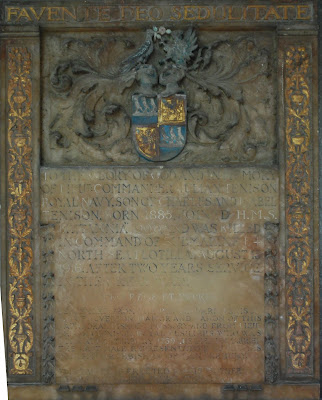 To the Glory of God and in Memory
Of Lieut. Commander Julian Tenison
Royal Navy, son of Charles and Isabel
Tenison, born 1885, joined H.M.S.
“Britannia” 1900, and was killed
in command of Submarine E4
North Sea Flotilla, August 15,
1916, after two years service
In the Great War.

Descended from the Rev. Edward Tenison
D.D. of Elverton Manor and Canon of this
Cathedral, Bishop of Ossery and from Lieut.
Thomas Tenison, Royal Fusiliers, who was
born at Canterbury 1739. He died unmarried
the last male representative of Thomas
Tenison, Archbishop of Canterbury

This tablet is erected by his mother and
by his sister Eva Mabel Tenison. 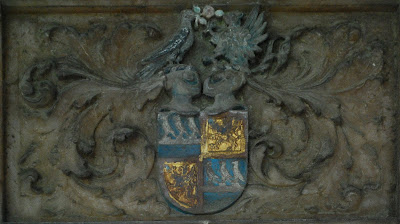 The arms are blazoned: Quarterly: 1 and 4, Sable [though the field here is clearly painted azure (blue)] a fess embattled and in chief three moorcocks argent (Tenison); 2 and 3, Or a griffin segreant sable, in dexter chief a trefoil vert all within a bordure gules (Boys).

The crests are: A moorcock sable in his beak a rose gules slipped vert (Tenison); A griffin sergeant sable charged on the shoulder with two trefoils in fess vert (Boys).

Burke’s General Armory blazons the birds in chief in the Tenison arms as three doves.

There is some similarity between the arms in the second and third quarters here (for Boys) and the arms of Anne Tenison (née Searle or Sayer) found in my July 15 post, in that in each there is a fess embattled and three birds, though the fess here is only embattled to chief, and all three birds are in chief, not two and one around the fess.


Regarding Lieut. Commander Tenison's death on the Royal Navy submarine E4, Wikipedia has the following to say about the submarine: HMS E4 was a British E class submarine built by Vickers, Barrow-in-Furness, costing £101,900. E4 was laid down on 16 May 1911, launched on 5 February 1912 and commissioned on 28 January 1913. The ship had a complement of 3 officers and 28 men. On 24 September 1915 E4 was attacked by the German airship SL3. On 15 August 1916, she collided with sister ship E41 during exercises off Harwich. Both ships sank and there were only 14 survivors, all from E41. Both boats were raised, repaired and recommissioned. She was sold on 21 February 1922 to the Upnor Ship Breaking Company.

A photograph of HMS E4 can be found on-line at http://www.harwichanddovercourt.co.uk/submarines-ww1/