Memorial to a Trans-Atlantic Clergyman


For our final armorial memorial in the Cloister at Canterbury Cathedral, we find this modern plaque inset into the wall: 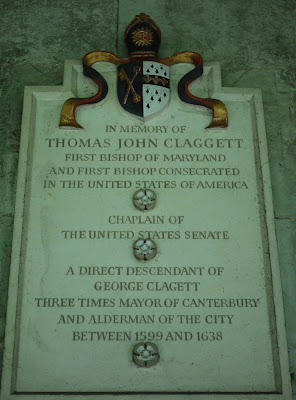 Chaplain of
the United States Senate

Bishop Claggett died August 4, 1816, at his family home, Croome, in Croom, Maryland. Originally interred in the family plot on the property, his remains were moved in 1898 to the National Cathedral in Washington, DC, then still in the early stages of construction.

Claggett's epitaph, which includes the dates of his ordinations, was penned by his friend and fellow churchman, lawyer-poet Francis Scott Key (1779-1843), author of the "Star Spangled Banner".

There is even a portrait of Bishop Claggett on the Wikipedia page.

Once again, it was the heraldry at the top of this memorial that caught me like a fly in a spider's web. 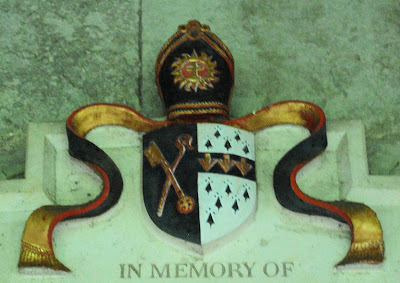 Burke’s General Armory gives the beautifully simple arms of Clagett (on the sinister side of the shield, to the viewer’s right) of Kent and London: Ermine on a fess sable three pheons or.