Another Monument to a Clergyman


Nearing the end of our survey of the heraldry in the Cloister at Canterbury Cathedral, we come to this monument to a clergyman. 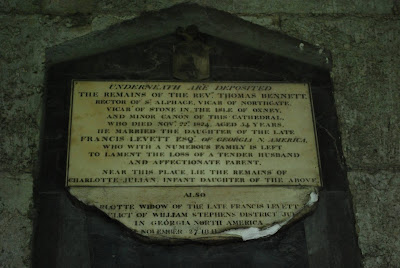 
Underneath Are Deposited
The remains of the Revd Thomas Bennett,
Rector of St Alphage, Vicar of Northgate,
Vicar of Stone in the Isle of Orkney,
and Minor Canon of this Cathedral
Who died Novr 22d, 1824, aged 54 years.
He married the daughter of the late
Francis Levett Esqr of Georgia N. America
who with a numerous family is left
to lament the loss of a tender husband
and affectionate parent.

Near this place lie the remains of
Charlotte Julian, infant daughter of the above.


The website Historic Canterbury (http://www.machadoink.com/St%20Mary%20Northgate.htm) tells us of Reverend Bennett:

As ever, though, it was the coat of arms and crest near the peak of the monument which caught my attention. Though not painted in color, it is partially hatched (the field, for gules, or red): Burke’s General Armory gives us: Bennett. Gules a bezant between three demi-lions rampant argent. (Given the relative sizes of the roundel and demi-lions, I think I would have blazoned it Gules three demi-lions rampant argent at fess point a bezant, but I know that the usual grammar of blazon places the central charge before more peripheral charges, unless the central charge is a mark of cadency. Still, Burke's blazon could make you believe that the bezant, the golden roundel, in the center is much larger than carved here.)

Cecil Humphrey-Smith’s An Alphabetical Catalogue of Coats of Arms in Canterbury Cathedral blazons the crest: A demi-lion rampant couped or holding a bezant.