Continuing on around the Cloister at Canterbury Cathedral, we find this armorial memorial set into the floor: 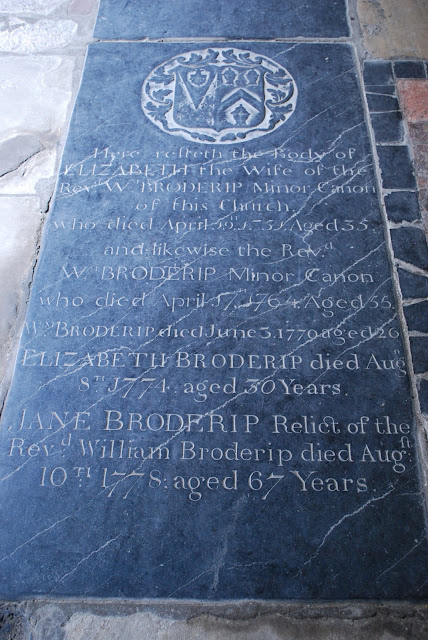 It is the arms on the memorial that lead us to our heraldic mystery, though. 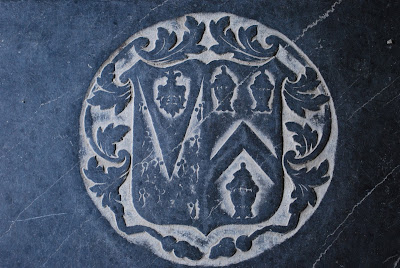 We have seen the arms on the dexter side of the shield (to the viewer's left) in our immediately preceding post regarding the memorial to Isaac Terry.

It is highly unusual to see an impalement with the wife’s arms to dexter (the viewer’s left); that place is normally reserved for the husband’s arms.

And about the husband's arms (ignoring for now that they are placed to sinister, in the place normally reserved for the wife's arms):

Neither Burke’s General Armory nor Papworth’s Dictionary of British Armorials shows “a chevron between three covered cups” for Broderip.

Burke gives two different coats for Broderip/Brodrepp/Brodribb. One is Gules three swans close argent; the other is Gules a cross couped or between four barnacle fowls (another, swans) argent. Obviously, neither of those two Broderip coats matches the chevron and covered cups here.

So I am at a bit of a loss to explain what is going on here. Why are Elizabeth Terry's paternal arms on the dexter side of this impalement? Where do the arms on the sinister side of the impalement come from? Whose are they, Broderip or someone else's?

I can only quote a line from the movie Shakespeare In Love: "It's a mystery."