So, after staring in awe at the massive east window in the Chapter House at Canterbury Cathedral, and then turning around to see the smaller windows with the arms of several Archbishops and Deans, we take a step back and then look up to see this: 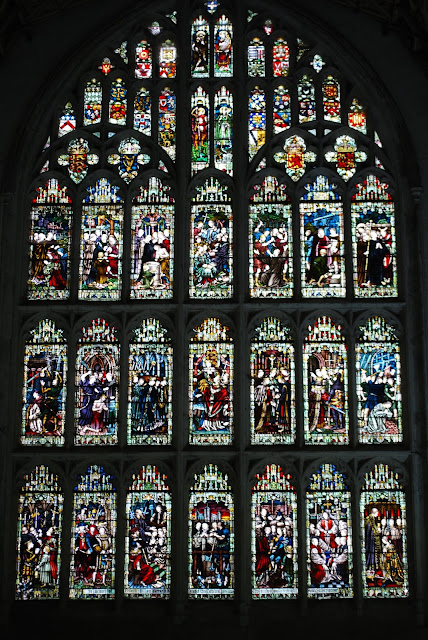 The inscription across the bottom reads:

In memory of / Frederick William Farrar, D.D. / Dean of this Cathedral 1895-1903 / This window was erected on / Public Subscription.

We saw Dean Farrar's coat of arms in the immediately preceding post.

Like the east window, the main part of the west window contains figures important in one way or another to the history of the Cathedral, from Queen Bertha, Augustine, and King Ethelbert (in the first three windows in the top row) through Thomas Becket and King Henry II (the first two windows in the second row) through King Henry IV (who is buried in the Cathedral) and King Henry VIII (in the first two windows in the bottom row), through the coronation of Queen Victoria in the last window at the bottom right. The difference is that this window omits the Royal heraldry but portrays some of the events for which the people portrayed are famous.

You can find a more detailed description of who is who in this window on-line at http://www.canterbury-archaeology.org.uk/chapter-west/4590809638

In this window, as in the east window, there is a lot of heraldry at the top, but before we get to some of those, if you look carefully, you will notice four smaller windows in the center with images of (l-r, top to bottom): St Andrew, St. David, St. George, and St. Patrick. These are, of course, the patron saints of Scotland, Wales, England, and Ireland, respectively.

Flanking these last is a row of shields, from left right, with the arms of: England, Ireland, Scotland, and Wales.

Surrounding and above all of these we have the arms of a great number of colleges of both Cambridge and Oxford Universities. 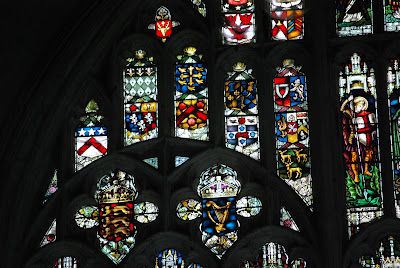 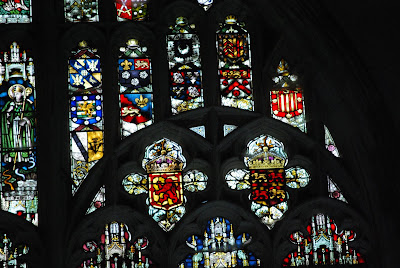 And, at the very peak of the window, the arms (once again) of the Dean and Chapter of the Cathedral of Christ Church, Canterbury. 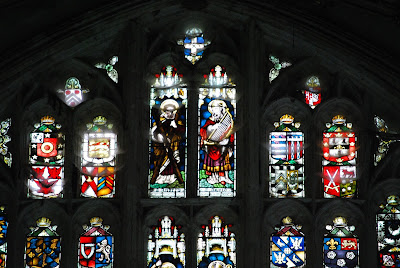 Of the colleges, you may recognize a number of them right off. I know I did, though I couldn't necessarily put a name to each of them without looking them up.

Want a "cheat sheet" to help you identify the arms here? Here are a couple of old postcards with the arms of the colleges of both Cambridge and Oxford. Happy hunting! 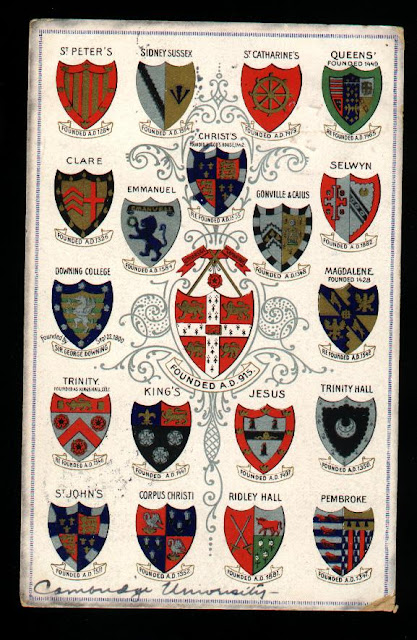 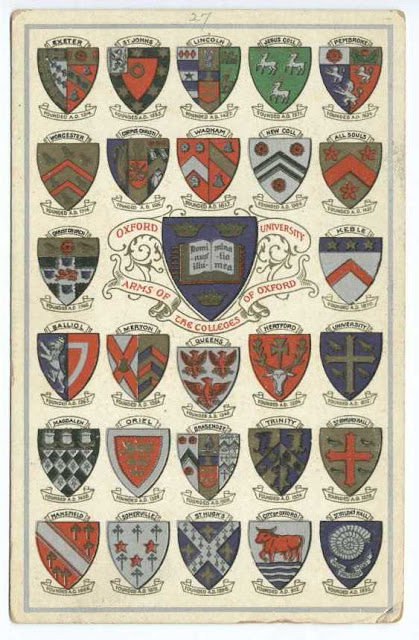