There Is a Good Reason for Heraldry's "Rule of Contrast"

I have seen it argued again and again over the years, why certain "low contrast" (color on color, or metal on metal) combinations ought to be permitted, instead of slavishly following the "rule of contrast" as outlined in so many basic heraldry books.

Well, there's a reason for the existence of this "rule", and it's founded on some good basic principles, mostly going back to the need for identifiability.

Some years ago, the State of Michigan, which normally issued new auto license plates every few years, had a short-lived experiment with plates on which the letters and numbers were white on a gold background. (What heralds would call "metal on metal".) There were so many complaints from law enforcement agencies all across the state that these license plates could not be read if they were a little bit dirty and then only in very good lighting conditions - neither of which regularly apply to Michigan roads, especially in the long winters - that the state issued new, high-contrast plates the very next year.

While exploring Canterbury, England, last fall, I came across another example, this one "color on color", of the issue with low contrast heraldry.

It was the Three Crows Tattoo parlor, which had these signs marking their place of business: 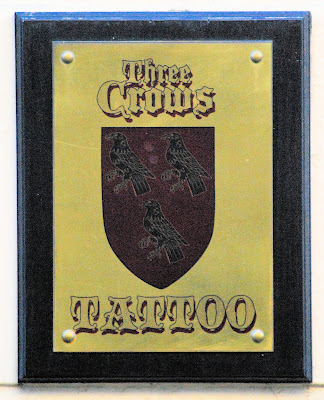 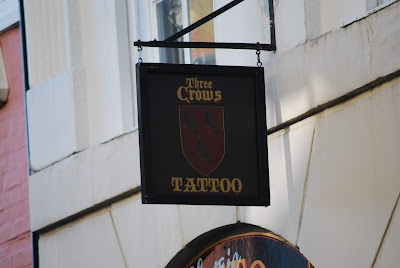 The above photos have been unretouched. You can see that it is very difficult to make out what it is that is on the shield. Frankly, you learn more about what's there from the wording on the signs than you do from the shield itself.

Now, here's the same signs with the contrast heightened and the overall picture lightened: 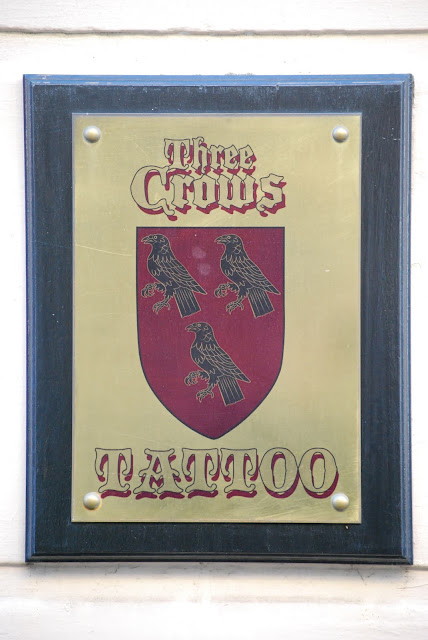 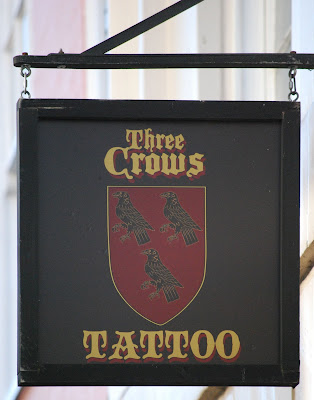 Those are better, but frankly, the shield would be much more effective if they had chosen high contrast between the shield and the birds; for example, a gold shield with the black crows, instead of a red shield.

C'mon, people! This "rule" of heraldry is there for a reason, and truly, the counter-examples cited by others over the years in discussions about this matter comprise a miniscule percentage of all of the coats of arms that there are. (Even the most generous estimates of such low contrast arms run between 1% to 3% of all coats.)

And, yes, I have read (indeed, I own a copy) of Archbishop Bruno Heim's book Or & Argent. But a significant number of his examples don't actually break the rule of contrast; they are examples of or and argent being placed next to each other on the shield, or such things as, for example, the arms of de Lagrenée, Gules a chevron or interlaced with another inverted ("reversed" in English blazon) argent, where the actual area of overlap between the low contrast charges is minimal.

So the next time you see someone who wants color on color, or metal on metal, on their arms, show them the first two pictures above, and tell them the story of the Michigan license plates, and remind them that identifiability should be one of the hallmarks of heraldry.