One of the many uses of heraldry, and one which goes back literally for centuries, is the application of an heraldic element for use as a trade, or even inn, sign.

This ancient (well, to we folks in the United States, anyway*) usage can still be seen in modern use today.

For example, there was this little sign over a shop in old Canterbury: 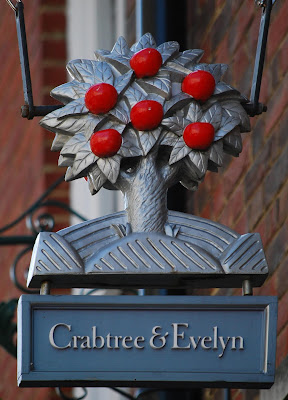 It's not quite an heraldic crest; it's on a hill or mound instead of a torse or wreath, but still ....

It is, of course, a crabapple tree, and marks the shop of Crabtree & Evelyn on Burgate Street in Canterbury. So this sign has not only the advantage of being nearly heraldry, it is canting near-heraldry. (Canting heraldry is heraldry that is a pun on the name; examples include the bird bolts in the arms of Bolton, a bow in the arms of Boven, bird wings in the arms of Wingfield, and so on.)

Of course, as an Appleton, I found it especially attractive. So be it.