Down one of the side streets off of High Street in central Canterbury, England, was a large sign across the front of a building that said "Historical Canterbury."

On each end of the sign was the image of a knight, front facing, holding in front of himself a sword, issuing from the center of a lindwurm, rather like a snake with a dragon's head, circled about not terribly unlike the strap and buckle of a Scottish clan badge, or the garter of the Order of the Garter. 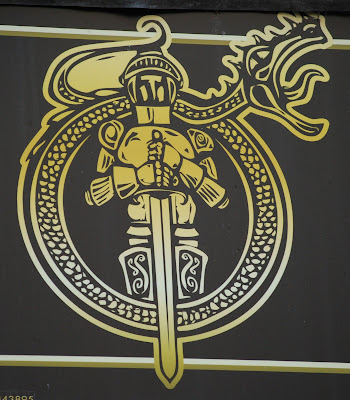 But right in the middle of the sign, between the words "Historical" and "Canterbury" was this image: 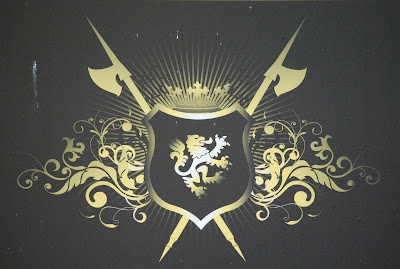 It's not a real coat of arms, of course; it's one of those modern, somewhat florid, pseudo-heraldic designs that one sometimes finds adorning a tee shirt.

Still, it uses a fairly stock lion rampant (even though it is facing the "wrong" way, to sinister) on a 19th Century shield shape, surmounted by a non-standard coronet in front of a pair of polearms in saltire.

It's an interesting design, and I seem to find something new in it just about every time I look at it.

But it ain't heraldry, though it tries hard to give that impression. Something to draw the tourists in, I suppose, but which left me somewhat bemused, as it is neither "historical" nor related to "Canterbury."