Not too far a walk from the offices of Burke & Best and their quasi-heraldic logo discussed in my last post, I found the Canterbury office of Jackson-Stops, a nationwide real estate broker. 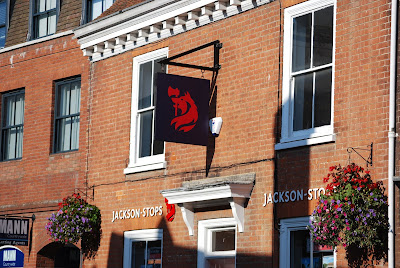 Their logo, found twice here (once on the facade, and once on the sign above the door. They also use it extensively on their website) is that of a wolf's head holding an axe in its mouth. 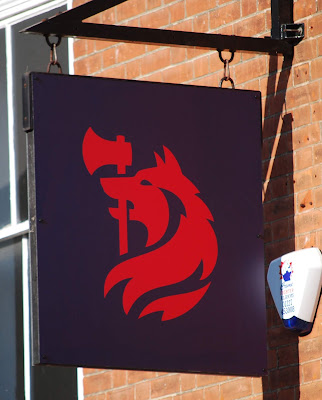 It is more logo than heraldry, but it certainly has an heraldic "feel" to it. It would be perhaps a little better with a higher contrast between the wolf's head/axe (in red) and the field (in black). (See my post of March 21, 2019, for another example from Canterbury of a low-contrast coat of arms, and why it's not the best idea.)

Still, I suppose it would cost them an unconscionable amount of money to change it now, and it does tend to catch the eye as it is.

I just wish they hadn't gone for low contrast at the outset.