Have Some Heraldry With Your Lunch, Part 2


In addition to the flags of Flanders and Picardy, discussed in my last post, there was some more heraldry hanging on the wall of the restaurant.

I tend to have mixed emotions about images, even heraldic ones, that I think were taken out of a book and the matted and framed. I mean, I like seeing heraldry displayed, but the purist in me hates the thought of a book being cut up into parts.

Still, it was clearly far, far too late for me to tell them not to cut a book up, so I'll have to settle for trying to enjoy the heraldry that was once printed in it.

First, there was this page, the arms of the region of Artois, which we have seen several times before during this trip, both alone and on the inescutcheon of the arms of Arras. Here, though the color of the label looks like or;* it should be: a label of three tags gules each tag charged with three towers in pale or.

* It appears that there has been some color shifting on each of these pages; in several of the arms what should be gules (or red) looks like or (gold). 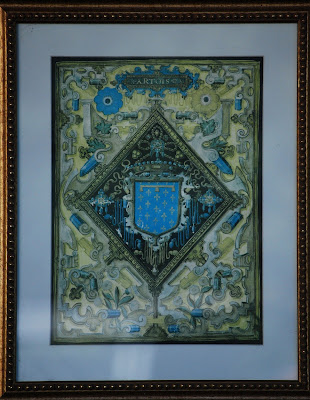 The other page was that of the arms of cities in the area. 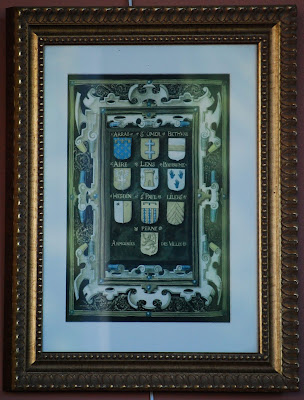 Here, the arms of the City of Arras is almost exactly that of the arms of Artois, above, except that the gold label has one or two hard to identify charges on each of the tags. If it were Artois, one would expect three towers in pale on each of the tags, but I cannot make them out here even when I enlarge the image significantly.

The other cities whose arms are given here (though often the colors are incorrect; I give the correct blazon with each city) are: St. Omer (Gules a cross of Lorraine argent), Bethune (Argent a fess gules), Aíre (Aire-sur-la-Lys, Gules an eagle displayed argent beaked and membered or), Lens (Azure a castle between in fess two fleurs-de-lys or), Bappaume (Azure a pair of hands and a sinister hand couped appaumy two and one argent), Hesdín (Per pale argent and gules in chief two mullets counterchanged), St. Paul (Gules three pallets vair on a chief or a label of three tags azure), Lílers (Lillers, Gules three (here, four) chevronels or), and Perne (Pernes-en-Artois, Argent a lion rampant gules crowned or).

Once again, it was very nice to have a little heraldry with our lunch!