Arms of the County of Kent

The County arms, Gules a horse forceny argent, were officially granted in October 1933 and re-confirmed in 1975. The white horse is said to be the symbol of the old Saxon kingdom of Kent dating from the 6th to 8th Centuries. The County's motto, Invicta (Unconquered), is based on a legend that a year after the Norman Conquest, in 1067, a band of Kentishmen ambushed and surrounded the new King William. In return for his life, he promised that the county would be able to keep its ancient privileges, thus making Kent the only part of England "unconquered" by the Normans.

Whatever you may wish to make of that, the arms of the County of Kent can be found in and about the old city of Canterbury.

For example, here's one found on High Street (on the same building housing a Tex-Mex restaurant, a type of eatery which I did not expect to see there), though given the same respect that pigeons seem to give to all art forms, whether full sculpture (my wife took a picture of a Florentine statue with a pigeon roosting on its head when we were in Italy a few years ago) or highly three-dimensional carving, as here: 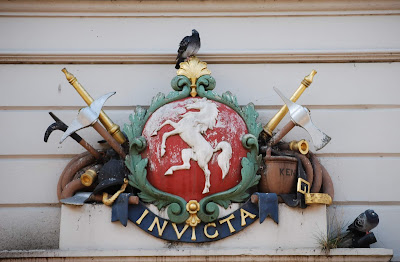 As you can see, there are a couple of pigeons roosting here, one atop the arms, and the other presumably acting as a sinister supporter (in the manner of a number of late 18th Century English achievements, where the supporters aren't really "supporting" the shield, but simply lying or lounging about it).

The building may originally have been a firehouse, given the picks, axes, hoses, and bucket (labeled "Kent") surrounding the arms.

Other versions of the County arms in different media were: 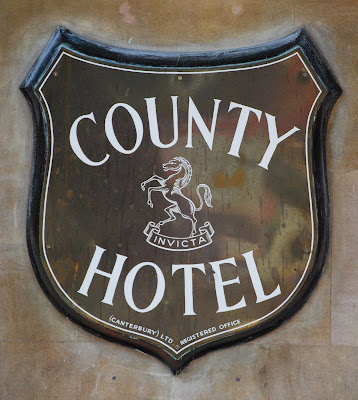 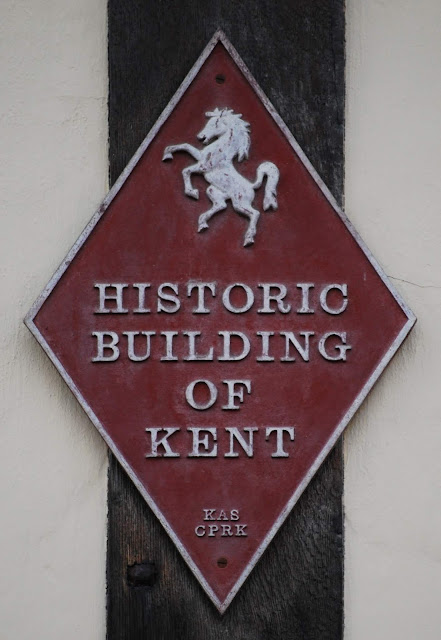 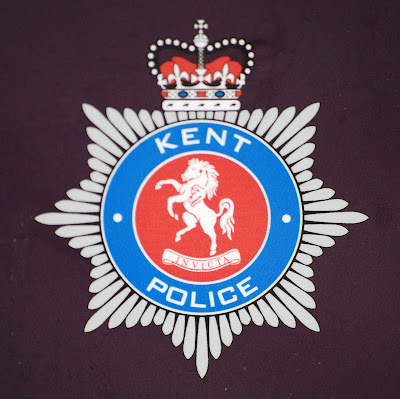 Once again, it's always nice to see heraldry in use!