Have Some Heraldry With Your Lunch, Part 1


Following the several days of the Congress in Arras, France, we signed up for an all-day excursion to some of the World War I battlefields and sites in the area.

Included in the excursion was lunch at a little restaurant next to one of the larger wartime cemeteries. And there waiting for us, along with our meal, was some heraldry! (Because, as I have often said, "You can find heraldry everywhere!")

In this specific instance, at one end of the smaller room that we were in were some heraldic flags. 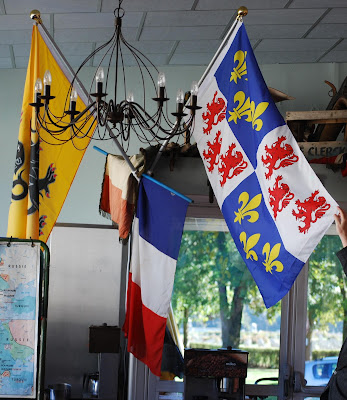 The central flag is, of course, the national flag of France.

The flag to the right (I got someone to take pictures while I held out the flags to see them better) contains the arms of Picardie (or Picardy, as we spell it in English), an historical territory and former administrative region of France. (It is now a part of a new region of Hauts-de-France.) Quarterly: 1 and 4, Azure three fleurs-de-lis or; 2 and 3, Argent three lions rampant gules. 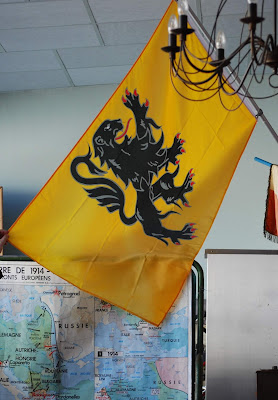 The other flag is that of the Department Nord, created from the western halves of the historic counties of Flandre (Flanders) and Hainaut, and which uses the arms of Flandre, Or a lion rampant sable armed and langued gules.

What a nice display of armory to go with a very pleasant lunch!