The Other Large Tomb in the Garden at St. Mary-at-Lambeth, London


In addition to the table tomb of Rear Admiral William Bligh and other family members and descendants in what is now the garden of The Garden Center (formerly St. Mary-at-Lambeth churchyard) (https://blog.appletonstudios.com/2014/11/entirely-unexpected-heraldry-in-london.html), is another marking the resting place of three generations of another family, the Tradescants.

John the Elder and John the Younger were naturalists, gardeners, and collectors, who between them traveled to the Low Countries, Russia, the Levant, North Africa, and even North America to bring plants and other specimens back to England. 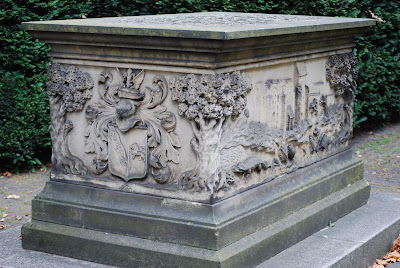 The present tomb (above) is the third on the site of the Tradescant grave and replicates the original design. It was restored by public subscription in 1853.

On the east side of the tomb is carved the family arms, on the west side a skull and a seven-headed hydra, on the south side broken columns, Corinthian capitals, a pyramid and ruins, and on the north side shells, a crocodile, and a view of some Egyptian buildings.

The epitaph on the top of the tomb was written by Tradescant's friend, John Aubrey (the spelling is modernized here):

Know, stranger, ere thou pass, beneath this stone
Lie John Tradescant, grandsire, father, son
The last dy'd in his spring, the other two,
Liv'd till they had travelled Art and Nature through,
As by their choice Collections may appear,
Of what is rare in land, in sea, in air,
Whilst they (as Homer's Iliad in a nut)
A world of wonders in one closet shut,
These famous Antiquarians that had been
Both Gardeners to the Rose and Lily Queen,*
Transplanted now themselves, sleep here & when
Angels shall with their trumpets waken men,
And fire shall purge the world, these three shall rise
And change this Garden then for Paradise.

But, of course, it was the heraldry that caught my eye. 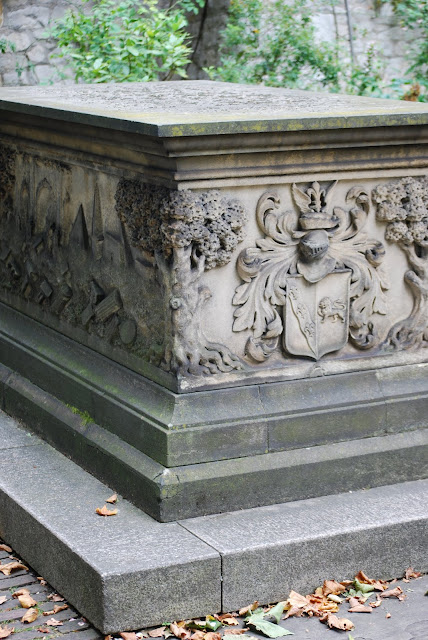 Unfortunately, I have been unable to find any reliable information about the Tradescant "family arms," which I would blazon (alas, without tinctures, as On a bend wavy three fleur-de-lis, impaling A lion passant. They do not appear in Burke's General Armory, Burke's Landed Gentry, Papworth's Ordinary of British Armorials, or any of my other armorials, ordinaries, and Visitations records. A review of Fairbairn's Crests for the crest here (Issuant from a chapeau a fleur-de-lis between a pair of wings) resulted in a list of the following names: Apeele, Apsley, Casson, Chamond, Chaumond, Crag, Cragg, Delins, and Edmonds. Nothing for Tradescant. 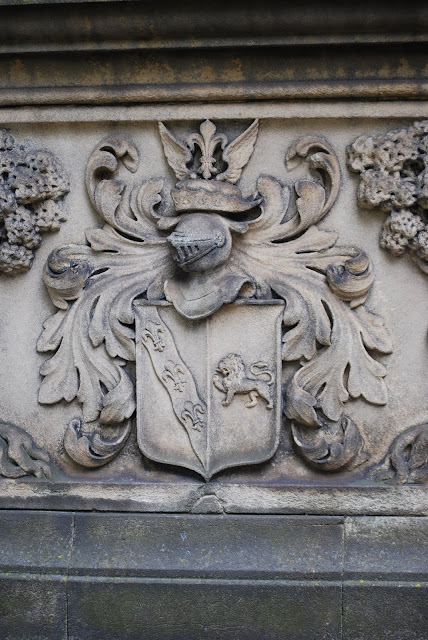 Given the comparatively lowly origins of the Tradescants, father from Suffolk, England, and son born in Kent, and despite their being gardeners to the first Earl of Salisbury, the first Duke of Buckingham, and to King Charles I and his wife Henrietta Maria, it may well be that the arms here are borne without right. It may very well be that as "up and comers" in early 17th Century England, they felt that they needed or were entitled to a coat of arms as a symbol of their status, even without the approval of (or having to pay the fees to) the College of Arms.

If that is true, it is certainly not without precedent. Remember that it was about this time that playwright William Shakespeare approached the College of Arms for a posthumous grant of arms for his father, which of course he immediately inherited, establishing his place in society as a gentleman.

Something I hadn't known about when we visited there, but which I totally would have wanted to do if we had, is that local Lambeth legend states that if the Tradescant tomb is danced around twelve times while Big Ben strikes midnight, a ghost appears. Now that would be something to write home about!