The Arms of a Hospital


Leaving the little church of St. Mary-at-Lambeth and its many heraldic offerings behind us, we took a stroll down one of the nearby streets and came upon this: 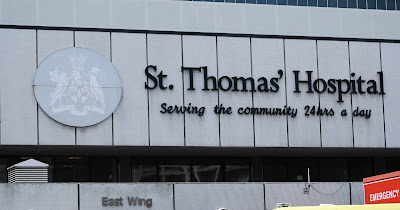 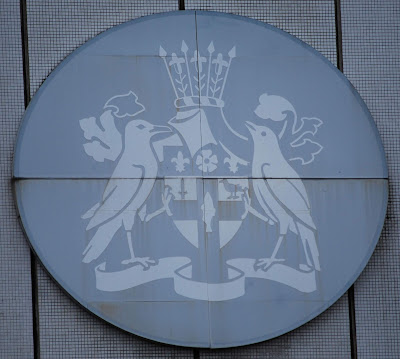 Its arms, granted on February 14, 1950, are blazoned: Argent on a cross between in the first quarter a sword erect gules and in the second quarter a chough proper, a roach haurient argent, on a chief azure a rose argent barbed and seeded proper between two fleurs-de-lys or.

As supporters, it has: dexter, A chough proper; sinister, A nightingale proper.

The cross and sword are clear references to the city of London, where the hospital is located. The nightingale supporter represents Florence Nightingale, and is a symbol for a hospital. The two choughs (the one on the arms and the other a supporter), popularly known as the Becket bird, represent St. Thomas Becket, after whom the hospital is named. The spears in the crest represents St. Thomas the Apostle, who was martyred by being killed with spears. (I am at this time unaware of the symbolism of the remaining charges on the arms and crest, though I could probably make some reasonable guesses; e.g., the Madonna lilies and fleurs-de-lys are often used as symbols of Mary, the mother of Jesus, and the hospital is very near St. Mary-at-Lambeth. The church of St. Mary-at-Lambeth has pre-Norman origins, being recorded as early as 1062 as a church built by Goda, sister of Edward the Confessor, and dedicated to St. Mary.)

It is both unusual and gratifying to seen a modern organization displaying its coat of arms so boldly on the face of its building.