A Memorial to a Beloved Rector


The other heraldic stone memorial which I photographed in the Garden Museum, formerly St. Mary-at-Lambeth Church, was to a former Rector of the Church, an ecclesiastic of some reknown. 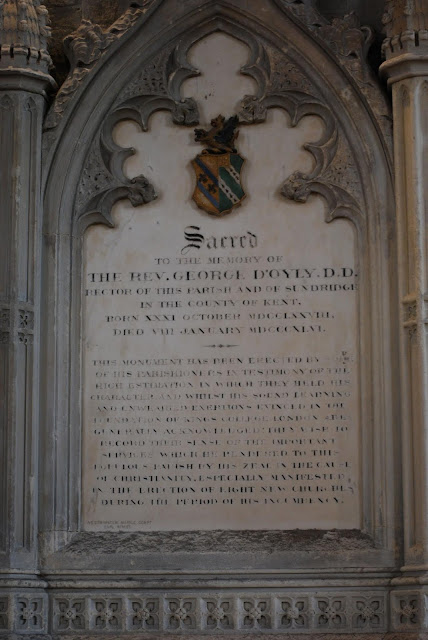 The text of the inscription reads:


Sacred
to the memory of
The Rev. George D’Oyly, D.D.
Rector of this Parish and of Sundridge
in the County of Kent,
Born XXXI October MDCCLXXVIII,
Died VIII January MDCCCXLVI.

This monument has been erected by some
of his parishioners in testimony of the
high estimation in which they held his
character and whilst his sound learning
and unwearied exertions evinced in the
foundation of Kings College London are
generally acknowledged; they wish to
record their sense of the important
services which he rendered to this
populous parish by his zeal in the cause
of Christianity, especially manifested
in the erection of eight new churches
during the period of his incumbency.

George D'Oyly, 1778-1846, was a cleric, academic, theologian, and biographer. You can find out more about his life and works, along with an engraving of him made the year of his death, on-line at https://en.wikipedia.org/wiki/George_D%27Oyly

Of course, it was really the carved and painted arms on the memorial which caught my attention. 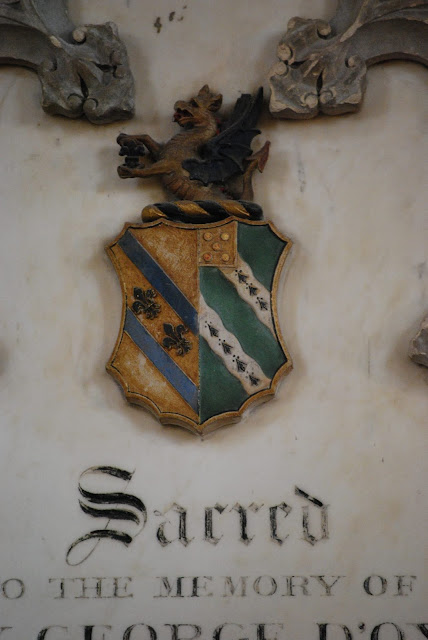 The shield is: Or two bends azure between them two fleurs-de-lis sable (D'Oyly); impaling, Vert two bends wavy ermine on a canton or five roundels in saltire gules (Bruere). (For Maria Frances Bruere, daughter of William Bruere. These arms were granted in 1803 by Isaac Heard, Garter King of Arms, and George Harrison, Clarenceux King of Arms, to George Bruere of Ashted, county Surrey.)

The crest is: A demi-dragon or winged sable holding between its forelegs a fleur-de-lis sable.

It's a beautifully carved and painted marshaled coat of arms, though there is a little wear on some of the gold and red paint. The other colors, however, remain clear and identifiable.

All in all, a very nice memorial to someone who clearly won the hearts of his parishioners.