A Memorial to an Archbishop


Set into one of the walls at the church of St. Mary-at-Lambeth in London, and partly hidden behind some empty flower pots and other gardening supplies when we were there (the chapel is now the Garden Museum, so much of the space is taken up with things having to do with gardening), was this carved stone memorial to Matthew Hutton, Archbishop of Canterbury from 1757 to his death in 1758. 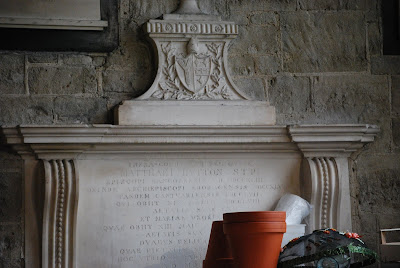 As the Latin inscription on the monument notes with other ecclesiastical offices he held, he was made Bishop of Bangor in 1743, Archbishop of York in 1747, and finally Archbishop of Canterbury in 1757, just a year before his death. 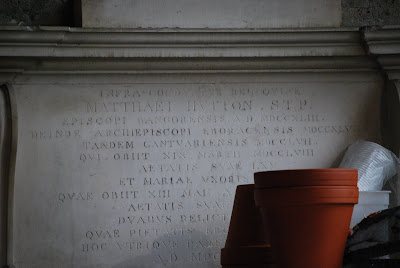 Archbishop of Canterbury for such a short time, he never lived at Lambeth Palace, though he was buried here at St. Mary-at-Lambeth, just outside the gates of the Palace.

You can find a painting of Archbishop Hutton, and more information about his life and ecclesiastical career, on-line at https://en.wikipedia.org/wiki/Matthew_Hutton_(archbishop_of_Canterbury)

Once again, of course, it was really the impaled coat of arms at the top of the monument which caught my attention. 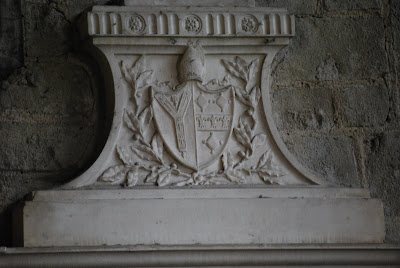 Surrounded by a laurel wreath, the shield displays the well-known arms of the See of Canterbury impaled with those of Archbishop Hutton, Gules on a fess between three cushions argent fringed and tasseled or three fleurs-de-lis gules.