Many churches in England (and Scotland, too!) have an image of the Royal Arms somewhere in their interior. St. Mary-at-Lambeth is no exception to this general rule, although the Royal Arms are not especially conspicuous, placed as they are in  corner being held by an angel which is also the support for one of the roof beams. 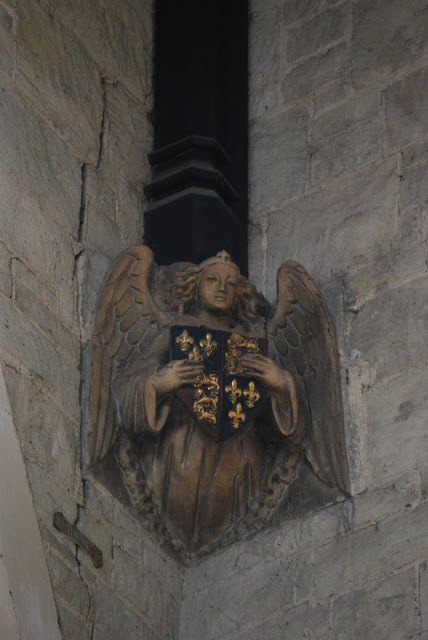 These arms are, of course, the Royal Arms as used by the Kings and Queens of England from the time of Henry IV through Elizabeth I, that is to say: Quarterly, France modern and England. (Or, far more wordily: Quarterly: 1 and 4, Azure three fleurs-de-lys or; 2 and 3, Gules three lions passant gardant in pale or.)

The arms are beautifully carved in fairly high relief, and gilded, and the angel holding them is wonderfully detailed.

I think it's a very tastefully done example of the Royal Arms, displayed in the protecting arms of an angel.

But what do I know?