An Armorial Porch as a Memorial


Around on the "back" side of St. Margaret's Chapel, Westminster, facing the Houses of Parliament just across the street, is a porch dedicated to Robert Lowe, Viscount Sherbrooke (1811-1892), Chancellor of the Exchequer 1868-1873 and Home Secretary 1873-1874. 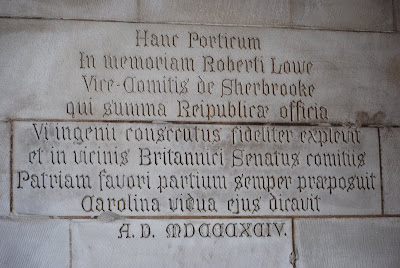 On the other side of the interior of the porch from the inscription in Latin (above), we find a finely-carved bust: It's a pretty good likeness, really. (You can compare it to his photograph on his Wikipedia page, https://en.wikipedia.org/wiki/Robert_Lowe)

There is a lot that has been written about Robert, Viscount Sherbrooke, and I'm not going to repeat all of it here. The Wikipedia page (above) about him gives a decent overview of his life. For those wishing even more detail, I recommend to you his entry in the Dictionary of National Biography at https://en.wikisource.org/wiki/Lowe,_Robert_(DNB00)

Because my especial interest, of course, is the heraldry contained around the base of his bust and over the doorway to the porch. 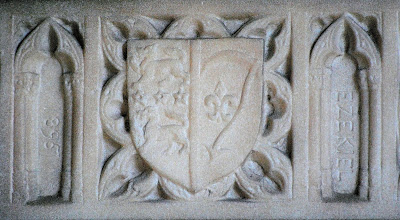 Centered on the band at the base of the bust are the impaled arms of Lowe and Sneyd. (In 1885, Lord Sherbrooke married as his second wife Caroline, daughter of Thomas Sneyd.) From what I have been able to deduce from my books here, these arms would be blazoned: Gules three mullets pierced in fess between two wolves passant in pale argent (Lowe); impaling Argent a scythe the blade in chief the sned (or handle) in bend sinister on the fess point a fleur-de-lis sable (Sneyd). (The arms are, somewhat obscurely, meant to be canting arms; that is, they are a pun on the surname.)

The other shields on the base of the bust each contain a bend (or bend sinister) inscribed with a Greek word. 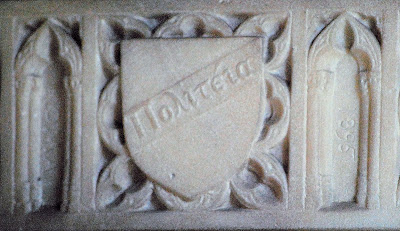 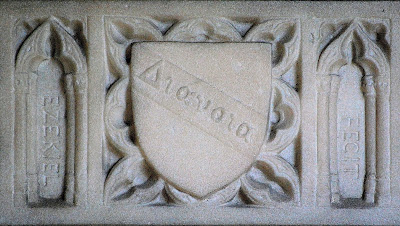 Lord Sherbrooke, who suffered from albinism and a related weakness of the eyes, recorded that Latin and Greek were the main subjects of his study at school, and that they were both easy for him. Indeed, when some wits in the 1870s suggested an epitaph for him, he promptly translated it into Latin. (See his Wikipedia article, above, for both the English and Latin texts.)

The Lowe and Sneyd arms also appear separately above the arch of the porch entry on the exterior of the church. 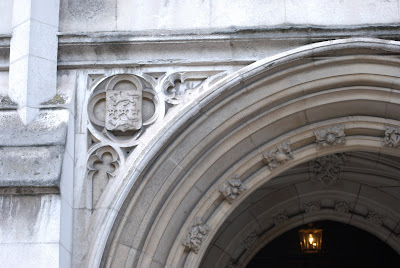 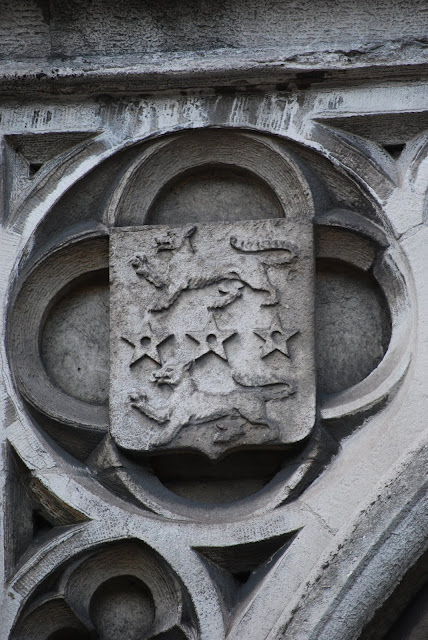 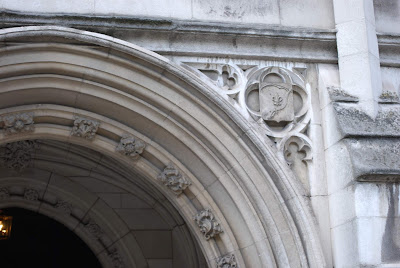 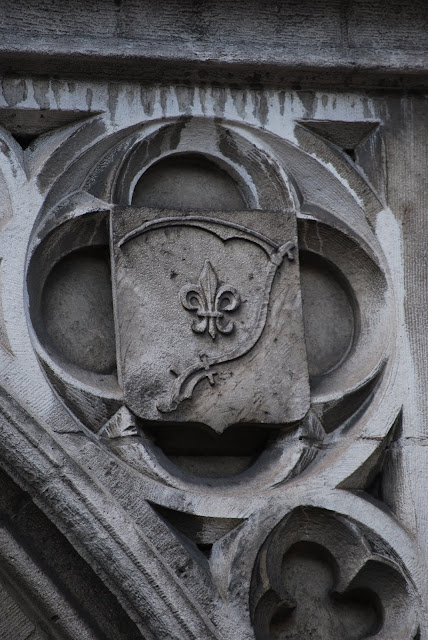 Lord Sherbrooke had no children by either of his wives, and so the peerage became extinct upon his passing.

Nonetheless, this fine armorial porch at St. Margaret's stands as a memorial to him.