The Arms of an Archbishop! 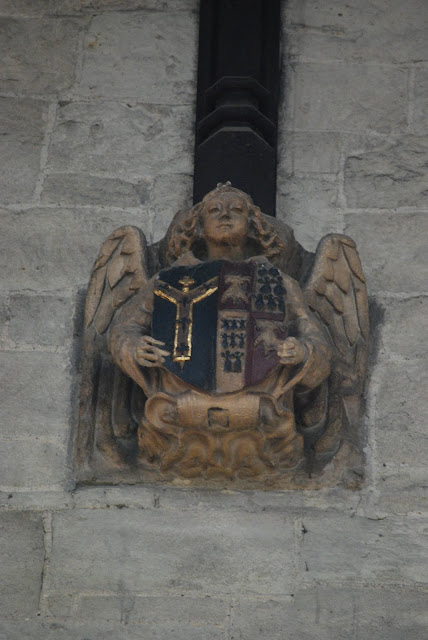 Archbishop Morton's arms can be blazoned a couple of different ways. Papworth's Ordinary of British Armorials blazons them as Gules a goat's head erased argent attired or quarterly with ermine, while Bentham's The History and Antiquities of the Conventual Cathedral Church of Ely (he was made Bishop of Ely in 1478) blazons them Quarterly gules and ermine in the first and fourth a goat's head erased argent. (Actually, I can think of yet another way to blazon the Archbishop's arms: Quarterly gules and ermine in bend two goat's heads erased argent [attired or].)

Cardinal Morton lived in interesting times, the tail end of the Wars of the Roses. He was Keeper of the Privy Seal to King Henry VI's government in exile in France, but after that king's death became reconciled with Edward IV, who appointed him Master of the Rolls from 1472 to 1479. He opposed the Yorkist regime of Richard III (for which opposition he spent some time in captivity), and the year after Henry VII came to the throne, he made Morton Archbishop of Canterbury, and Lord Chancellor of England the year after that.

Sir Thomas More as a young man was a page in Archbishop Morton's house, and Morton is thought by some to be the original author of More's History of King Richard III.

More information about the life of Archbishop and Cardinal John Morton can be found at https://en.wikipedia.org/wiki/John_Morton_(cardinal)

What a fascinating history behind this little carved coat of arms high up on the walls of the church of St. Mary-at-Lambeth!