An Attributed Coat of Arms in a Church


Having finished up our heraldic tour of St. Margaret's Chapel, Westminster, we move on down and cross over the Thames to the Church of St. Mary-at-Lambeth, a deconsecrated church (which is now the Garden Museum) immediately outside the gates of Lambeth Palace, the home of the Archbishop of Canterbury.

I've posted before about some "Entirely Unexpected Heraldry in London" (https://blog.appletonstudios.com/2014/11/entirely-unexpected-heraldry-in-london.html), in which we ran across the tomb of Vice Admiral of the Blue William Bligh at this Church.

Though deconsecrated, the building still contains of a fair bit of heraldry, which I will try to share with you over the next several posts.

One especially nice carved and painted coat of arms was one of a number of arms, each supported by a carved angel, placed around the interior where the base of the arches of the ceiling meet the walls.

I recognized this coat of arms immediately: 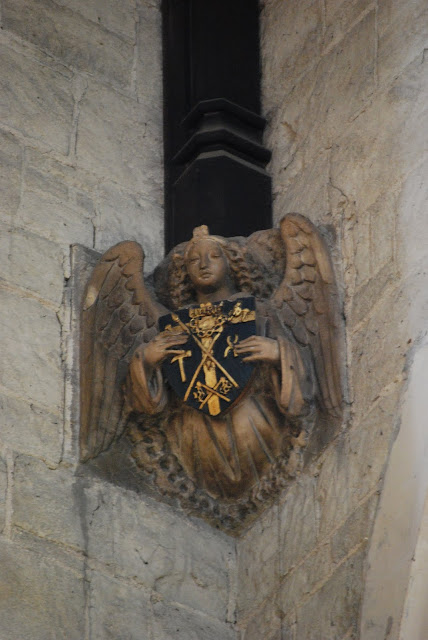 See if you recognize it, too.

Go ahead. Take a good look if you need to. I'll wait. When you are ready, scroll down.

Yes, it is (one of the) attributed arms of Jesus, containing the items associated with his Passion: the cross (topped by the sign placed there by Pilate inscribed "INRI"), the crown of thorns, the three nails, the hammer which hammered them in, a pair of pliers (for removing the nails, presumably), a pair of flails (scourges), a spear, and a sponge on a pole.

Utterly appropriate to its setting of a church, and a wonderful example of both heraldic and the stonemason's art.