In Memory of a Marquess


Continuing our heraldic tour of the Bute Museum in the Royal Burgh of Rothesay, we found this nice heraldic display of the full achievement of arms of John Crichton-Stuart, the 5th Marquess of Bute. 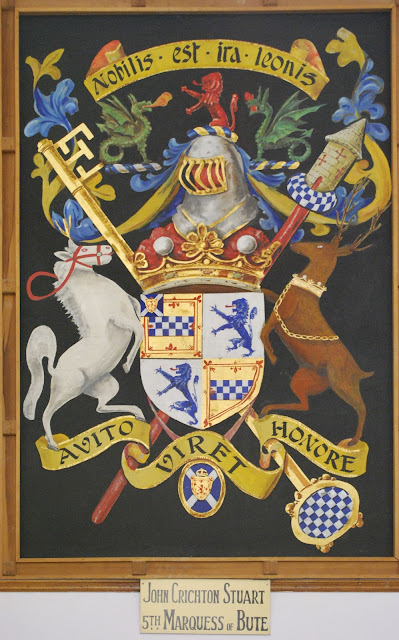 John Crichton-Stuart (1907-1956), 5th Marquess of Bute, was the son of John Crichton-Stuart, the 4th Marquess, and Augusta Bellingham. On his father's side, the 5th Marquess was a direct male-line descendant of Robert II of Scotland through John Stewart, his illegitimate son by Moira Leitch. On his mother's side, the 5th Marquess was a descendant of William IV of the United Kingdom through Elizabeth Hay, Countess of Erroll, one of his illegitimate daughters by his mistress, Dorothea Jordan.

The Marquess was an expert ornithologist; in 1931 he bought the islands of St. Kilda to preserve them as a bird sanctuary, leaving them to the National Trust for Scotland in 1956.

The family is an old and noble one, taking up five full pages in my 1938 copy of Burke's Peerage, Baronetage, & Knightage, with the Crichton line going back to 1484 and the Stuart line back 100 years before that in the records.

The arms are: Quarterly: 1 and 4, Or a fess checky azure and argent within a double-tressure flory counterflory gules (Stewart); 2 and 3, Argent a lion rampant azure (Crichton); in dexter chief the badge of a baronet of Nova Scotia. The shield is surmounted by the coronet of a marquess. The supporters are Dexter: A horse rampant argent bridled gules; Sinister: A stag rampant proper gorged with the coronet of a marquess and chained or. The crest atop the barred helm of a peer is A demi-lion erect gules. The secondary crests are: A wyvern sejant vert breathing flames proper (Crichton) and A wyvern sejant vert holding in its mouth a sinister hand gules (Herbert). (You may have seen this last at times in the television series Downton Abbey, filmed at Highclere Castle, home of the Herbert Earls of Carnarvon.) The motto above the shield is Nobilis est ira leonis (The lion's anger is noble); the motto below the shield is Avito viret honore (He flourishes by ancestral honors). Also below the shield is appended the badge of a baronet of Nova Scotia.

I assume that the key (whose checky azure and argent portion is taken from the Stuart checky fess) is indicative of the Marquess' office of Hereditary Sheriff of County Bute, and that the rod with the tower (also with a checky fess about its base) indicates his office as Hereditary Keeper of Rothesay Castle.

I don't know what else I can say about this beautifully worked achievement of arms. It was wonderful, though, to see it prominently displayed there in Rothesay.