A Naval Badge at the Bute Museum


The Bute Museum, just behind and across the street from Rothesay Castle, is a great little place to visit, with a very eclectic collection, including (as we have already shared) a fair bit of heraldry.

Among this heraldry are a number of ships' badges (more on the others next time), at least one of which was mounted on a plaque with even more information about what it represented: 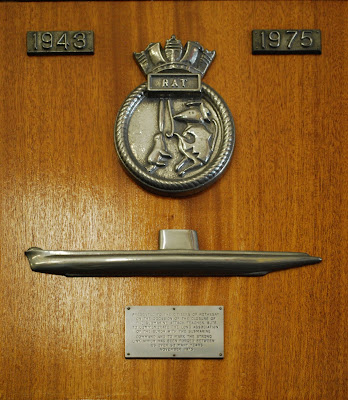 
Presented to the citizens of Rothesay
on the occasion of the closure of
the Submarine Attack Teacher, Bute,
to commemorate the long association
of the Burgh with the Submarine
Command and to mark the strong
link which has been forged between
us over so many years.
November 1975

The Submarine Attack Teacher was an elaborate training device at Port Bannatyne, a suburb of Rothesay, was a part of the Royal Navy's submarine commanding officers' course.

I'm not sure where the "Rat" comes from; I can find no ship (or submarine) in the Royal Navy by that name. It may be an acronym, but it's one letter off for Submarine Attack Teacher (which would be SAT).

Still, it's clearly "Rat", as the badge shows (in part) a rat wearing academic dress (cap and gown), so there you go.

What a neat (and heraldic) way to commemorate the long relationship between the Royal Burgh of Rothesay and the Royal Navy.