In Memory of a Duke


Going up the social ladder in our heraldic tour of the Bute Museum in Rothesay, we ran across this little heraldic gem:

It appears very much to me like a carved decoration from the stern of a large boat or small ship. It is beautifully carved -- just look at the way those thistles run from one end to the other, framing the achievement of arms in the center.

That is not to say it is without its issues. It appears to have been overpainted, more than once, and some of the colors used are incorrect (as you will notice when comparing the picture below to the blazon). Plus, the escallops in the husband's arms look more like garbs. And the ermine tails on the husband's fess and the small charges on the label on the wife's arms are lacking. The torse appears to be carved as a solid, straight bar perched precariously atop the helm. 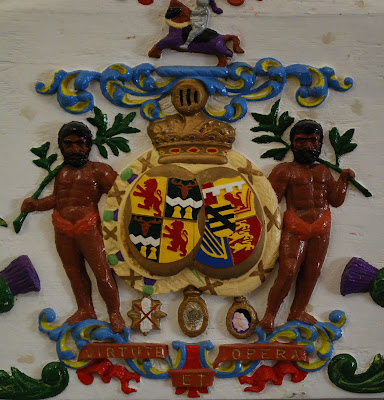 It is the achievement of arms of Alexander William George Duff, 1st Duke of Fife, and his wife, H.R.H. Louise Victoria Alexandra Dagmar, the Princess Royal, eldest daughter of King Edward VII.

His arms are: Quarterly: 1 and 4, Or a lion rampant gules (Fife); 2 and 3, Vert a fess dancetty ermine between a stag's head cabossed in chief and two escallops in base or (Duff).

Her arms are the Royal Arms of Great Britain with an inescutcheon of Saxony and with a white label of five points charged alternately with three St. George's crosses and two thistles slipped and leaved proper.

The crest is A knight on horseback armed cap-à-pie. The supporters are Two savages wreathed about the head and waist with laurel and holding in their exterior hands a branch of a tree over the shoulder all proper. I am unable to make out the motto above the crest. (If I have to guess, I think it begins with "Deo", but my picture (and the overpainting) is not clear enough to make out much more than that.) The motto under the the shield is Virtute et operâ (By virtue and deeds).

Even with all of it's errors, though, it's an amazing display of heraldry, and a wonderful piece to run across in a little museum in Scotland.