Ships' Badges at the Bute Museum


Further adorning one of the walls at the Bute Museum in Rothesay were a number of Royal Navy ships' badges: 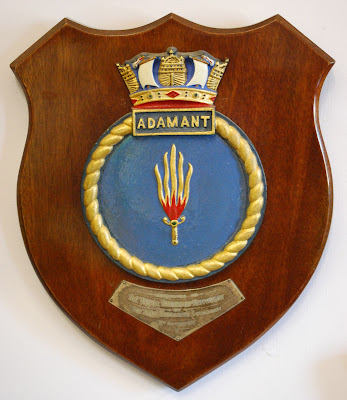 HMS Adamant (A164) was a submarine tender launched in 1940 and broken up in 1970. In October 1954 she was commissioned as a depot ship to the 3rd Submarine Squadron at Rothesay, where she was based until October 1957. Her badge is a sword of five tongues of flame. The plaque notes that it was "Presented to the Royal Burgh of Rothesay by the [I can't quite make out this word; it might be Third] Submarine Squadron." 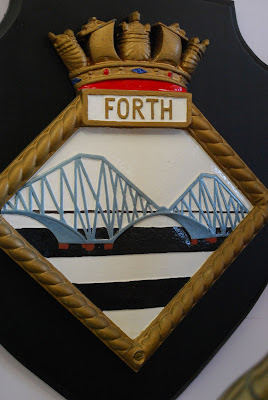 HMS Forth (FO4, later A187) was a submarine depot ship launched in 1938. She was renamed HMS Defiance between 1972 and 1978, and was sold for scrapping in 1985. She served at Holy Loch on the River Clyde (Argyll and Bute) for a period during WWII. Her badge is of the famous bridge over the Firth of Forth. 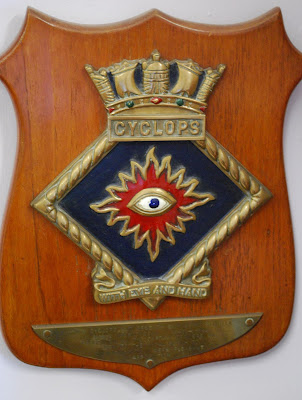 HMS Cyclops (F31) was repair ship, launched in 1905 as the merchant ship Indrabarah. She was used as a fleet storage ship and then as a submarine depot ship for the Royal Navy's 7th Submarine Flotilla based at Rothesay. (I think I'm beginning to see a pattern in the service of the ships whose badges are in this museum, as well as what their connection to Rothesay might be! How about you?) HMS Cyclops was scrapped in 1947. Her badge is appropriate to her name, a single eye (it's either "enflamed gules" or "on a sun gules") of the one-eyed giant from The Odyssey. 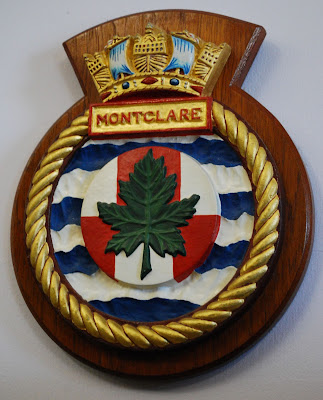 HMS Montclare (F85) was originally a passenger ship built in 1922 on Clydebank (on the north shore of the River Clyde) for the Canadian Pacific Steamship Company of Montreal. In 1939 she was requisitioned by the Admiralty and converted to an armed merchant cruiser, and sold to the Admiralty in 1942 and converted to a Destroyer Depot Ship, sailing from the Clyde in early 1945 for Sidney, Australia, and the Pacific. Decommissioned in 1954, she was sold for scrapping in 1958. Her badge clearly emphasizes her Canadian heritage, A fountain proper (symbolizing the waves of the sea, or perhaps the River Clyde) charged with on a roundel per fess argent and gules a pale counterchanged a maple leaf vert.

What a great heritage of naval history and heraldry, all on the walls of a little museum on the Isle of Bute.