There are two displays of the same coat of arms at St. Cuthbert's Church in Dalmeny, Scotland.

The display in the interior of St. Cuthbert's is another work of embroidery, and bears the legend "Stewart of Craigiehall and Newhalls." 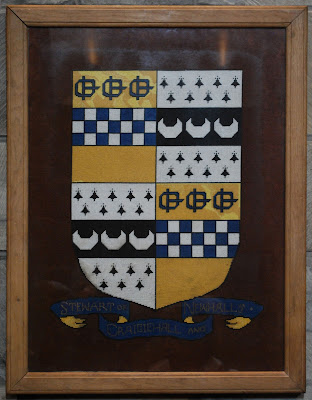 Burke's General Armory blazons the arms of Stewart of Craigiehall, co. Linlithgow (1672) Quarterly: 1 and 4, Or a fess checky azure and argent in chief three buckles azure; 2 and 3, Ermine on a fess sable three crescents argent (for Craigie).

Sir James Balfour Paul's An Ordinary of Arms blazons Stewart of Newhalls (1672-7) as: Quarterly: 1 and 4, Or a fess checky azure and argent in chief three buckles azure; 2 and 3, Ermine on a fess sable three crescents argent. 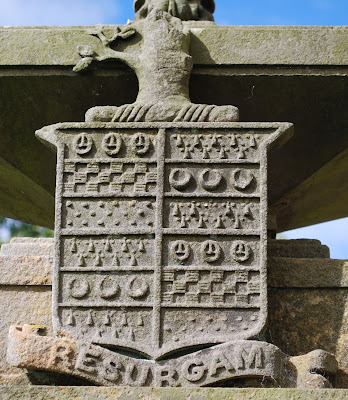 The or field and azure checks of the fess are hatched, and of course ermine is easy to make out, but the remainder of the tinctures of the shield are not hatched. (Well, it's not really very easy - or clear - to hatch the buckles azure or the other fess sable in the space allotted here.)

The crest is blazoned in Fairbairn's Crests as The trunk of an old oak tree sprouting a branch on the dexter side fructed proper. The motto, Resurgam, means "I shall rise again." (One branch of my own family, the Winslows, has a similar crest, the stump of an oak tree sprouting new branches, but this one is more specific that it is only sprouting on the dexter side. The Winslow motto has a similar general meaning: Decoptus florio (or, deceiptae flores), meaning roughly "cut down, I shall flourish again." But I digress; I just found the similarities between the crest and motto of the Stewarts of Newhalls in Dalmeny and the Winslows in my own family interesting.)

Some might make an issue of the way the buckles are oriented in the Stewart quarters in these two depictions: to sinister in the embroidery; and to chief on the tomb outside. For myself, I think the direction of the buckles (or more specifically, the tongues the buckles) is something that makes no real difference and can probably be ascribed to the preferences of the artists involved. Just my two cents' worth. If you know of some case in heraldry where the direction of the buckles is clearly considered to be a difference, I'd love to learn about it.

I will note that Sir John Brooke-Little in his An Heraldic Alphabet says that "In blazon it is safest to detail the type of buckle, the way it lies on the shield (if not upright) and the position of the tongue," but he gives no rationale for this statement. I can see blazoning the type of buckle if that is important to the owner of the arms, but I'm not so sanguine about the rest. Still, I remain a student of heraldry, and can certainly be swayed in my opinion about this by evidence that it is a more important detail than I currently believe.