Heraldry at Another Old Scottish Church


The next stop on our heraldic tour around Scotland was the church at Abercorn in West Lothian.

It's an interesting church - and I don't mean just heraldically - with parts of the building dating from the 12th Century, and with major renovations having been done in the late 1800s.

Of course, we couldn't even get inside before we started seeing some heraldry there. 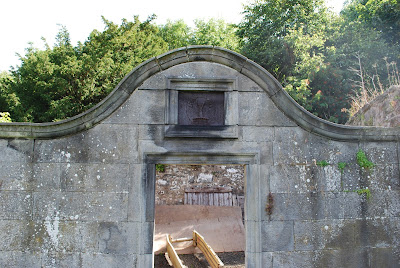 Over against one of the walls surrounding the churchyard was this enclosure, from the looks of it used now mostly for storage of tools and materials. But over the doorway leading into it, there is a very nice armorial plaque, that looks to be cast metal. 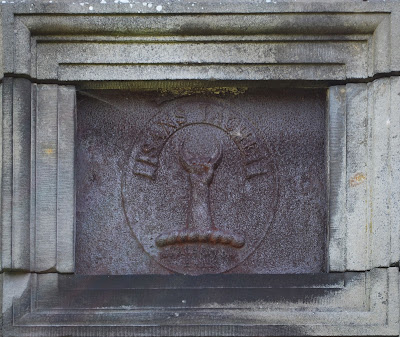 There is an inscription below the crest, but I can only partially make it out, and it does not obviously relate to Napier at all:

As you can see, I'm not entirely certain of the second L in HALL, but that's what it looks like to me.

If it is, indeed, "Hall," then presumably it is the home of this branch of the Napier family.

If it is not, well then I'm just shooting in the dark and coming up with nothing.

In any event, though, it's an interesting heraldic display in a not-very-common medium (I've mostly seen arms in cast iron for firebacks), and it's a good start to our visit to this heraldically interesting Scottish church.