An Heraldic Stray in Scotland?


Continuing our tour of St. Cuthbert's Church in Dalmeny, Scotland, we ran across this 1985 grant of arms from Lord Lyon King of Arms Malcolm Innes of Edingight. 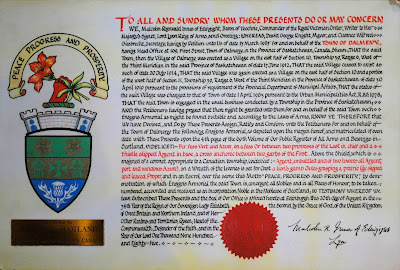 It's a grant of municipal arms to the Town of Dalmeny, blazoned as Per fess vert and azure on a fess between two primroses or and a thistle argent a cross anchory between two garbs or. The crest is A lion's jambe gules maintaining a prairie lily slipped and leaved proper. (The blazons give here are my own, and not Lord Lyon's, and follows the more modern convention of repeating tinctures where needed in the blazon, rather than using the sometimes confusing "of the last" and "of the first.")

It was when I was reading more carefully through the text of the grant that it struck me that this was not a grant to the town of Dalmeny, Scotland, where we were visiting St. Cuthbert's Church, but the town of Dalmeny, Saskatchewan, Canada! Apparently I had completely overlooked the little plaque below the shield stating quite clearly:

So, not an "heraldic stray," exactly, but a gift from the grantee to its namesake town in Scotland.

And just how cool is that?