You can see why I felt it necessary to include his service in the Royal Navy and his wife's father in the description above, given the broken mast, broken chain, and anchor fouled with a broken rope which are the greater part of this stone memorial, all of which are clear and obvious allusions of naval service.

More information about the Dundas family in general, and Adam Dundas and his family in particular, including a portrait of him in his naval uniform, can be found on-line on the Dundas Family website at http://www.dundasfamily.co.uk/dundas%20of%20dundas_2.html

Of course, the part that most attracted my eye (well, after all the naval bits) was the achievement of arms at the base of the memorial. 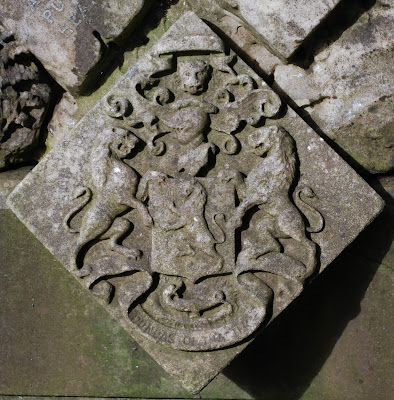 Burke's General Armory (the stem arms do not appear in Sir James Balfour Paul's An Ordinary of Arms, though the arms of a number of cadet branches do appear there, mostly differenced with a bordure, either plain - e.g., gules, ermine, compony - or "bumpity" - e.g., engrailed) gives the following entry for Dundas, of Dundas, co. Linlithgow:

Argent a lion rampant gules. Crest - A lion's head full-faced [e.g., a leopard's face, or a lion's head cabossed] looking out of an oak bush proper. Supporters - Two lions gules, and below the shield, for a compartment, a salamander in flames of fire proper. Motto - Essayez ("Try").

The salamander "compartment" is easily seen even in the smaller image, but you really have to go to the larger image to see the surrounding flames. And I still cannot find the oak bush from which the leopard's face is supposed to be showing.

The scroll below the supporters and compartment is worn (well, it is over 100 years old, after all!), but says "Dundas of Dundas." (The second "Dundas" is very difficult to make out.)

Taken as a whole, it's a wonderful memorial to this couple and their Royal Navy connections.