The next stop on our heraldic tour of Scotland was Dumfries House in Ayrshire. Alas, I'm not going to be able to share with any but a very little of the heraldry we saw there, as the House is owned by the National Trust and does not allow photographs to be taken inside. Still, I'll do what I can.

William Dalrymple-Crichton, 5th Earl of Dumfries KT (1699-1768) inherited the title of Earl of Dumfries in 1742, upon the death of his mother Penelope Crichton, 4th Countess of Dumfries. He commissioned Robert Adam, and John Adam to build Dumfries House, which was completed between 1754 and 1759.

Naturally, as the home of a Scottish peer, there is an impressive achievement of arms displayed on the pediment over the main entrance. 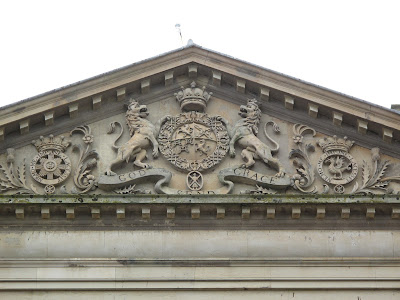 You should click on the image above to go to the large-size picture, so as to see all of the detail involved in this display of heraldry.

The arms are: Quarterly: 1 and 4, Argent a lion rampant azure armed and langued gules (Crichton); 2, Or on a saltire azure nine lozenges or (Dalrymple); 3, Azure three water bougets or (Crichton). The arms are surrounded by the collar of the Order of the Thistle and surmounted by the coronet of an Earl. The supporters are: Two lions rampant crowned. Motto: God send grace (Creighton, per Fairbairn’s Crests).

The crest can also be found elsewhere as a decorative element on some of the drainpipes on the exterior of the House: 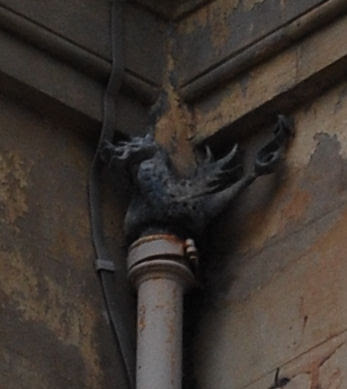 But I digress. To return to the pediment: the foliage on each side of the central achievement and on both ends is a combination of roses and thistles, slipped and leaved.

I'm pretty sure they wanted to make sure that everyone knew whose house this was, so as not to get it confused with any of the other great houses in the county. Or as a way of marking their territory.

It is, in any case, as Charles Burnett and Mark Dennis put it so well in their book Scotland's Heraldic Heritage: The Lion Rejoicing, "an exuberant union of family, art and history."