To Whom Do These Arms Belong?


It's always interesting, visiting an art and/or antique store I've never been to before, because you just never know what you're going to find.

We've been looking lately for a painting or other art piece to go over the television in the living room. We're taking our time with it, because whatever we get we're going to be looking at for a long time. But our tastes are pretty similar, and we're pretty sure that when we see "it," we'll know.

In the process of that search, we went to an antiques store we'd never been to before. We didn't find the art that we were looking for, but we did find this: 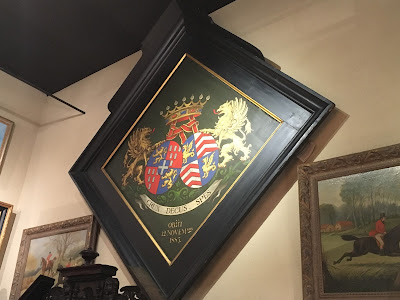 It's clearly a large (I'm afraid a little too large to do well in our living room, but we were a little tempted by it anyway) memorial board. We were told that it came from a French church, but there wasn't a lot more they could tell us about it besides the (hefty) price.

I thought to myself that, given that it appears to be the shields of a husband and wife who are pretty clearly of the nobility, it shouldn't be all that hard to track down whom this board memorializes. It turns out, I was only partially correct.

The coronet appears to be that of a baron of The Netherlands. The supporters are two griffins or, armed and langued gules. The motto is Crux decus spes (Cross honor hope). (A slightly different motto, Crux decus et spes, was borne by Gerard du Demaine, per the Dictionnaire Des Devises Historiques Et Héraldiques, Vol 1.) The date of death at the bottom is 12 November 1885.

The wife's arms were actually as easy to track down as I thought the entire achievement would be. They are found in Rietstap's Armorial Général as:

My attempt at a translation into English makes it: Draeck (de)  Antwerp, Ghent (Barons, 18 May 1782. [Literally, House off. I assume that means the de Draeck line had died out by the late 1800s.] Quarterly: 1 and 4, Azure a dragon [which the English would blazon a wyvern] winged and scaled or (de Draeck); 2 and 3, Argent three chevrons gules (de Wesele known as Sompecqui). Crest: A dragon as in the arms. Supporters: Two dragons winged and scaled or langued gules.

And the arms appear in Rolland and Rolland's Illustrations to the Armorial Général: 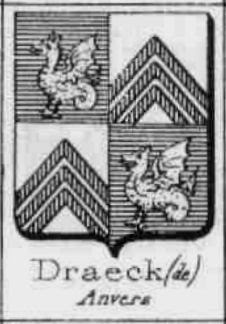 But I was striking out completely on the husband's arms. Oh, Rietstap had plenty of quarterly arms with a gold rampant lion on a blue field in the first and fourth quarters, as here, but the other quarters were completely different from these. Riestap has only three entries for a red field with six white billets:

Not all that helpful, especially since the three entries are from Brittany and Normandy, on the west side of France, where the other identified arms, and the coronet, seem to indicate an origin in the Low Countries.

After asking on-line among some heraldry enthusiasts if anyone had any idea on who these arms could belong to, our friend Luc Duerloo provided an identification for the inescutcheon on the husband's arms, de Bousies, a Belgian noble family. (He also thinks the entire achievement looks Belgian.)

Here's an image of de Bousies, also as an escutcheon of pretence on a quarterly coat of arms (though, alas, an entirely different coat from the arms on the memorial board), from the Wapenboek van de Belgische Adel by Luc Duerloo and Paul Janssens. (It's a great book, basically an illustrated ordinary of Belgian arms, with a names list at the back. It's also cool that I know one of the authors personally. It's also a very thick book; I'm pretty sure it about doubled the weight of my suitcase when bringing it back to the States from where I purchased it in Europe.) 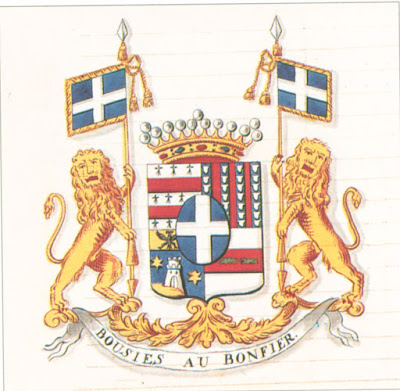 So there you have it. We've managed to identify two of the three shields on this memorial board. Unfortunately, the one so far been identified is the husband's arms, and that makes researching the rest of the family a lot more difficult. What little I've been able to find on de Draeck women has them marrying men who bear different coats of arms from the one here.

So if you think you might know to whom these arms belong, I'd love to hear your thoughts, because I've gone just about as far as I can in identifying them, and I'd really like to know more.

And, of course, if you have the room at your place (and a few thousand dollars laying about the house just waiting to be spent) for this memorial board, let me know and I'll tell you where this heraldic gem is currently hanging out and waiting for the right buyer to come along.