Above the main entrance to Dumfries House, atop the pediment with the achievement of arms that I discussed in my last post, is a flagpole with the Dumfries House Flag. 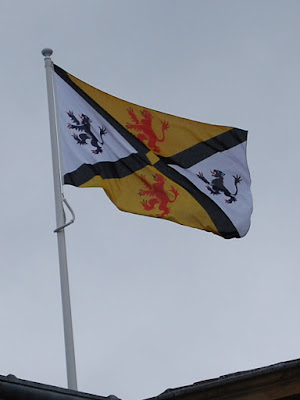 A sign nearby entitled "Dumfries House Flag Protocol" discusses the three flags which are flown at various times by the House.

Of the other two, one is the Standard for Scotland of Prince Charles, Duke of Rothesay, and is flown whenever he is in residence at the House. The third is the Union Flag (I appreciate them not calling it the "Union Jack") which is flown on certain birthdays.

At all other times, the flag flown on the House, as it was the day we were there, is the Dumfries House Flag. Of this flag, we are informed:

[The Dumfries House Flag] incorporates the Coat of Arms granted to the Great Steward of Scotland's Dumfries House Trust in 2015. The Arms contain reference to those principally involve in the evolution of the estate. The two blue lions on white background come from the Crichton Arms and commemorate the original purchase of the estate by William Crichton, 1st Earl of Dumfries, in 1635. The two red lions allude to the Royal Arms of Scotland and the intervention of the Duke of Rothesay to save the house. The black saltire and gold lozenge allude to the Arms of William Crichton-Dalrymple, 5th Earl of Dumfries, who commissioned the Adam brothers to build the house.


I'm not certain why the House flag was give a black saltire instead of a blue one; of all of the Dalrymple arms that I can find with this motif, it is always a saltire azure.

Be that as it may, there you have it, a whole lot of history all wrapped up into a single heraldic flag, flying proudly above the Dumfries House in Ayrshire.