Heraldic Usurpation in the News


I had considered covering the second of these two items at a later date, but then the first item was brought to my attention very recently, and because they both touched on the same general topic, I felt I just had to say something now.

In a post over on LogoDesignLove on May 30, blogger David Airey talks of the "Origins and making of the Porsche crest." (We'll forgive him, this time, the use of "crest" when talking about a "coat of arms," or in this case, a coat of arms used as a corporate logo.)

It turns out that the Porsche logo (above) is simply the arms of the state of Württemberg (with the addition of the word "Porsche" across the top of the shield), with an inescutcheon (the small shield in the center of the large shield) of the city of Stuttgart (with the word "Stuttgart" across its top). Mr. Airey explains the main elements in the following graphic: 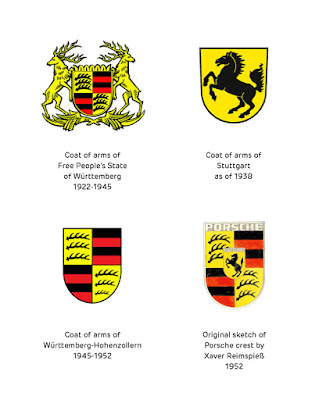 In short, the Porsche logo is simply the usurped arms of the German city and state where the cars are made.  You can read the entire post (and find some links to a video that shows how the hood emblem is made as well as a couple of other articles about the Porsche logo, on LogoDesignLove at http://www.logodesignlove.com/porsche-crest-origins

So what was the other story about heraldic usurpation that had cropped up? The use of one family's personal coat of arms as a logo by properties owned by the current President of the United States of America, Donald J. Trump. (We have posted about his troubles with Lord Lyon King of Arms in a post back in January 2012. See http://blog.appletonstudios.com/2012/01/heraldry-in-news_18.html) 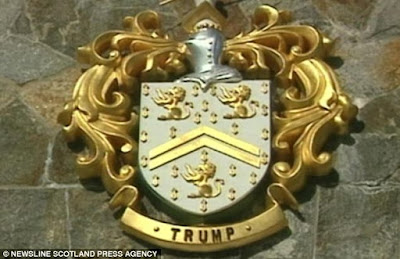 It turns out, according to several news reports, that the coat of arms/logo at issue (above) wasn't just something thought up by the people who work for him. It's an actual coat of arms granted (though in different colors) by the College of Arms in London in 1939 to Joseph Edward Davies, the third husband of Marjorie Merriweather Post, the socialite who built the Mar-a-Lago Resort in Florida, which Mr. Trump purchased and is now often serving as the "weekend White House." The arms granted to Mr. Davies are: 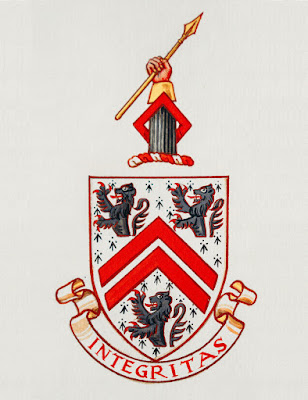 There are a number of articles about this issue on-line; I will simply include the links here so you can to and see for yourself what is being said. (Well, except for the one comment by a correspondent of mine who said that he found it amusing that "Trump was apparently keen to make sure that it was an 'Integras-free zone.'")