Next stop on our tours around Glasgow was The Collection at the Burrell, some 9,000 objects of art from a wide variety of times and places, the compilation of collector Sir William Burrell and his wife Constance.

One of the first things you see after entering the building is the very impressive 16th Century Hornby Arch, taken from Hornby Castle in Yorkshire, where it served as the main doorway. The Burrell Collection obtained it in 1930 when the estate was broken up and most of the house demolished. 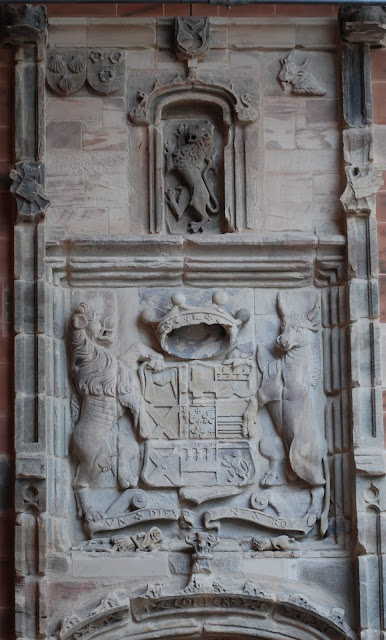 In the image above, you can see the name "Conyers" carved into the peak of the doorway arch below the arms.

Though in some ways similar to the arms of the Earls of Huntingdon which we have discussed earlier (http://blog.appletonstudios.com/2017/06/im-earl-of-huntingdon-and-youre-not.html), these arms are not those of the Hastings family; note, for example, the different supporters, different quarterings on the shield, and so on. Further, the coronet is that of a baron, not an earl. (I am certain that full-color versions of both the Hastings and Conyers arms would further highlight all of their differences.) 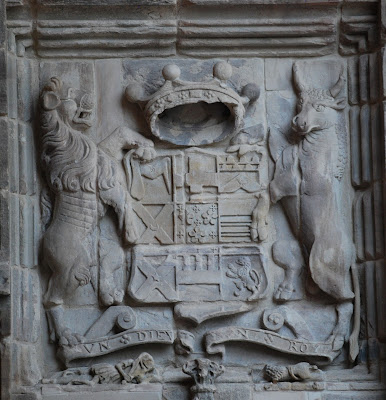 The paternal arms of the Conyers are given in Burke's General Armory as Azure a maunch or, which Baron Conyers of London and Hornby Castle differenced (per the 1568 Visitation of London*) with a crescent or surmounted by another gules in chief. In the carved depiction here (and you may have to click on the image to go to the larger version to see it) the crescent appears on the maunch itself rather than on the field in chief.

* The Visitation of London 1568 published by the Harleian Society notes that "Francis Conyers descended of a younger howse of Conyers of Hornsby in Yorkshire." The Visitation of Yorkshire 1563-64 gives the arms of Conyers of Hornsby as "Saphire a une manche topace, sus la manche une annulet Ruby" (or, in standard blazon, Azure a maunch or, on the maunch an annulet gules (for difference)), which appears to more closely match the Conyers arms depicted here. (The cadency mark on the maunch is hard to make out, but it looks to me more like an annulet than a crescent or a crescent on a crescent.) 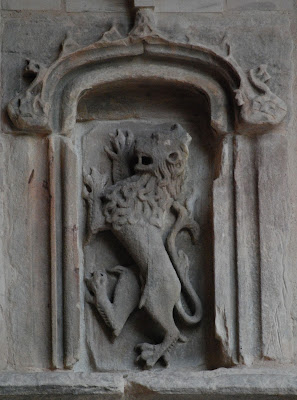 I'm not certain that the lion rampant in the alcove above the arms is to be taken for the crest. If you look at the large picture of the Hornby Arch at the top, on the right is a crest, a bull's head. Burke, however, gives the crest of Conyers (of London and Hornby) as A sinister wing gules differenced with a crescent or surmounted by another gules. A different Conyers family (Conyers of Bowlby) used a bull's head with its neck pierced by an arrow as a crest, but not this family, at least that I have found.

Anyway, I'm not entirely certain what the lion here represents.

Additionally, at the top of the Arch on the left side, are two smaller shields, one with three escallops and one with three chaplets or laurel wreaths. I'm not certain who they represent; neither appears to be the arms of the St. Quintins.

You may also notice the paternal arms of a maunch on a small escutcheon at the very top of the work, though I do not see any marks of difference on that shield.

So although some of this display remains a bit of a mystery as far as the identification of all of the quarters, the rampant lion, and the two small shields go, what a grand entrance to a house. We should all be grateful that the Burrell Collection was able to acquire this piece of monumental heraldry when much of the house was demolished, thus preserving it for us to see and share!