A Piece of Heraldic Serendipity


It never really ceases to amaze me, that I seem to run across coats of arms and heraldic pieces wherever I go. Even when I'm just visiting a local antique store looking for something else entirely having no relationship at all to heraldry.

The most recent example of this was last Friday, when my wife and I went to an antique shop because they were having a big sale and we're in the market for a nice painting or other piece of art to fill in the big blank area over the television. We've been looking for a little while now. We haven't found what we're looking for yet (though we have seen a couple that we rated as "almost, but not quite"), but we're pretty sure we'll know it when we see it.

But while wandering about the place looking at paintings, etc., I saw this in a display case. 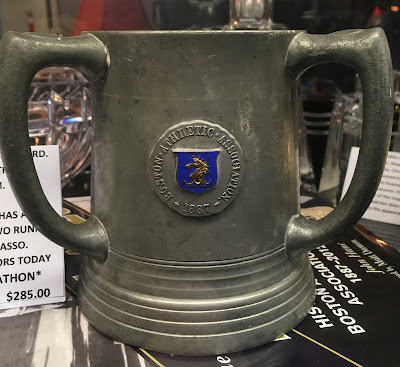 It's a three-handled tankard with the arms/crest/logo of the Boston Athletic Association and the date 1887 on it.

The BAA was established on March 15, 1887, and is one of the oldest athletic clubs in the country. It is probably best-known for its organization and sponsorship of the annual Boston Marathon beginning in 1897. 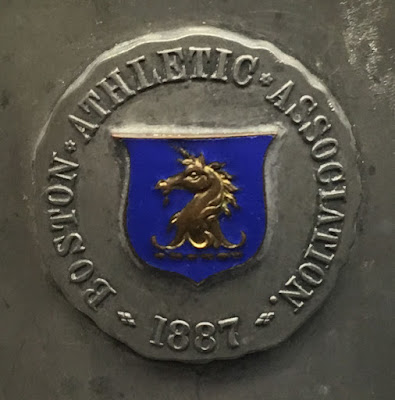 The BAA's logo is a blue shield with a gold unicorn's head erased atop a torse. Above is the one found on the tankard, and below is the one that the BAA uses on its website today. 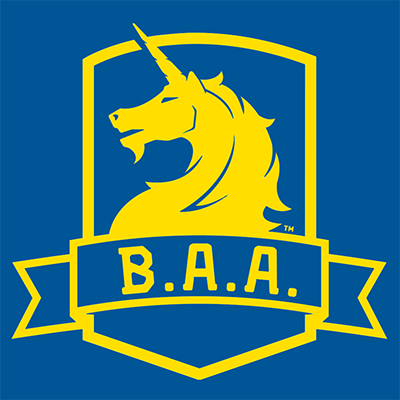 As an heraldic purist, that they put a crest on the shield irks me, but I don't think that the modern version is an improvement, having the unicorn's horn project outside the shield and with the "B.A.A." banner (which at most should be placed under the shield like a motto scroll) overlying the shield.

Still, it's a comparatively simple design, and it uses a real unicorn's head and not just a horse's head with a horn attached to its forehead, so I think I'd give them reasonably high marks for the attempt at making it heraldic. The concept isn't bad, but it ends up missing the "this is good heraldry" mark by a fair bit.

Still, it was an interesting piece of heraldic art to run across while looking for something entirely different!