One of the very interesting activities in which we were able to play the part of spectators was a session of the Court of the Lord Lyon King of Arms. 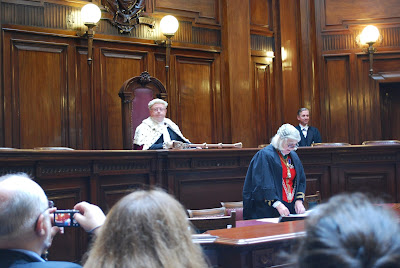 Since it was being held "on the road," as it were, and not in Edinburgh, the City of Glasgow provided the use of the Burgh Court (right behind the City offices). As a courtroom, there was, of course, a carved coat of arms to lend dignity and no little majesty to the court. 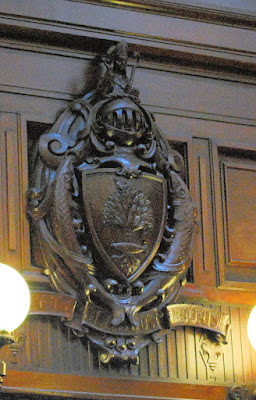 Being a city court, the arms are, unsurprisingly, the arms of the City of Glasgow, complete with St. Mungo as the crest, fish supporters, and motto: Let Glasgow Flourish. (Once again, and unlike the usual practice in Scotland, the motto is placed below the shield.)

It's a beautifully carved coat of arms, as I think you will agree!