Leaving the entryway of the Trades Hall in Glasgow and walking just a couple of blocks over to one side of St. George's Square, we find the building that houses the offices of the City of Glasgow and is it's face to the world.

So of course you just know that they're going to have something pretty spectacular to greet people when they enter the building. 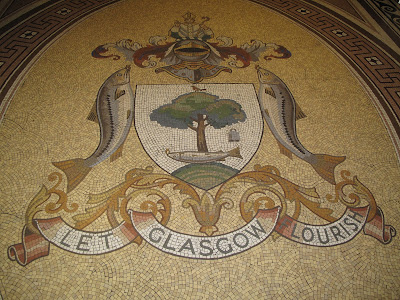 This is, of course, a mosaic of the achievement of arms of the City, complete with supporters, crest, and motto. (If you click on the image, you should see the full-size photo, which will let you see a lot more of the detail in it.)

The only real quibbles I have about it is that the more usual practice in Scotland is for the motto to be placed above the crest rather than beneath the shield, and I personally have never really cared for those "gas bracket"-style compartments (which the fish supporters are not really standing on in any case). Still, though, it's an amazing display of heraldry.

Every time I look at this picture, I wonder what it might cost to have someone do something like this for the entryway to my house. I suspect, however, that it's one of those things that: "If you have to ask, you can't afford it." Curses, foiled again!

Still, I can always look at this one and enjoy the fact that someone has an entry this grand!