Royal Heraldry in the University Chapel


The tour organizers took us into the Memorial Chapel at the University of Glasgow, which had a lot of heraldry in various media. I hope to share with you some of the heraldry in the choir stalls, but it may take a little while to get the coats of arms identified; we'll see if my time will allow that in the near future.

But, of course, the Chapel has a display of the Royal Arms, in this instance, carved in stone: 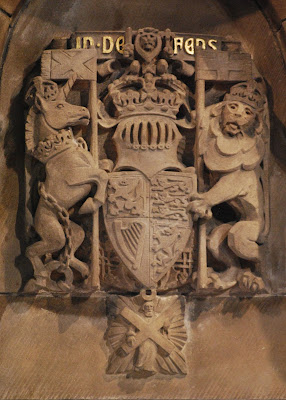 It is a depiction in a modern style (as, indeed, many of the other sculptures and carvings are) of the Royal Arms as used in Scotland, with the collar of the Order of the Thistle (of thistles and rue, get it? "And-rew") with an image of St. Andrew bearing his cross before him pendent from it.

I might wish that the lion supporter looked a little less primitively carved, but all in all there's something about this depiction of the Royal Arms that I really like.

What do you think?