Well, as long as I'm still on a roll with heraldry from the movies, and since we're still undergoing the phenomenon that is Star Wars Episode VII: The Force Awakens, I found a couple of articles on-line about where someone had designed flags for many of the planets, and even the Death Star, from the movies, animated series, comic books, and video games.  ('Cause some folks just can't get enough of their Star Wars, don'tcha know?)

Anyway, while not heraldry strictly speaking (though vexillology, the study of flags, is certainly a related field to heraldry), I thought that these might be of interest.

Art director and New Zealander Scott Kelly has designed over 100 flags to represent the planets (and the Death Star!) from the Star Wars world. 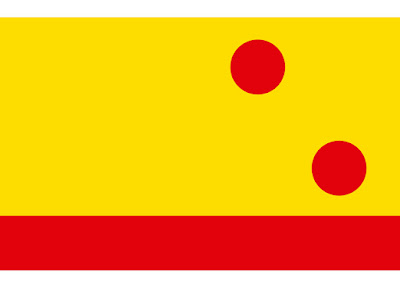 This, for example, is the flag he designed for Tatooine, Luke Skywalker's home planet, with its two suns.  It's also highly reminiscent of one of the stills from the original Star Wars movie, now Episode IV: A New Hope), with our erstwhile hero looking out over the desert as the two suns set in the distance. (This design is actually my favorite, I think. It's clear, simple, readily identifiable; everything that a flag, or a coat of arms, should be.)

Anyway, if you're a fan of heraldic symbols, or of flags, or even just of Star Wars, you might check out Mr. Kelly's designs.  You can see some of his designs at http://www.dezeen.com/2015/12/16/scott-kelly-fictional-flags-planets-of-star-wars/#disqus_thread or at http://curbed.com/archives/2015/12/17/star-wars-flags-flipped.php