"Crests, flags and coats of arms possess a kind of power."

Thus opens a website which brings to us some of the heraldry which can be found in the Harry Potter books and movies. 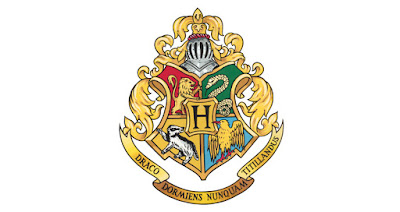 For example, the "coat of arms" of Hogwarts School of Witchcraft and Wizardry, consisting of the emblems of its four founders whose names are given to the four houses within the school: Gryffindor, Slytherin, Hufflepuff, and Ravenclaw (in quarters one, two, three, and four, respectively).

There's a fair bit more, of course.  Not as much as heraldry enthusiasts might prefer, but still ....

You can find the new MACUSA arms which we discussed in my last post, the arms of Hogwarts, and a number of others on the website Pottermore on a page entitled "The MACUSA seal and other other emblems from the wizarding world" at https://www.pottermore.com/features/the-macusa-seal-and-other-emblems-of-the-wizarding-world